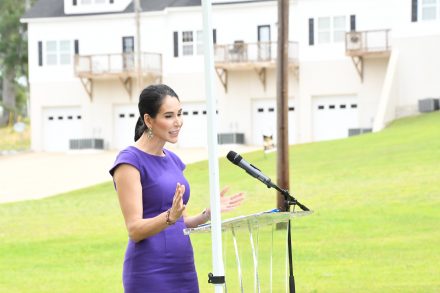 Greenberg began by thanking everyone for allowing her to speak and noting that it was noting short of a miracle for her to have this opportunity with her unlikely heritage.

While living in Bainbridge, Greenberg’s father continued to fly. However, in September of 1982, Greenberg’s father left on a trip and never returned. To this day, Greenberg and her family still are unsure what happened as the plane and crash sight were never found and he was declared diseased after seven years.

During this time, Greenberg’s mother faced multiple challenges; she had never paid bills, pumped gas and English was her second language, but this brought Greenberg to her focus of the speech. Her mother was not afraid of failure and not getting everything just perfect, she continued to work hard and provide for her family the best she knew how.

This work ethic reminded Greenberg of a quote by Rocky Balboa.

“Life is tough, I don’t care how strong you are. It will beat you to your knees and keep you there permanently if you let it. You, me or nobody is gonna hit as hard as life. But it ain’t about how hard you hit, it’s about hard you can get hit and keep moving forward.”

This determination drove Greenberg to become Salutatorian of her graduating class and follow her dreams of becoming a DMD. She pursued a degree in microbiology at the University of Georgia. After her first year, she became homesick and wanted to return home, but her mother insisted she return. Greenberg was scared of returning and failing, but she followed her mother’s wishes.

“You cannot let the fear of failure or a fear of comparison or the fear of judgment stop you from doing the things that make you great,” she said. “You cannot succeed without failure.”

Greenberg went on to dental school in Augusta, following her graduation at UGA, where she learned to not just do what you’re good at, but do what makes you great and brings you out of your comfort zone.

“Do what is hard, but will pay off in the long run,” she said.

Greenberg explained she failed time and time again. Her teachers were retired military and demanded perfection. She said she spent countless hours in the lab redoing dental work because she was off by a millimeter, which was considered a mile in their line of work.

However, Greenberg learned that students who spent more time in the lab reworking or rewaxing a tooth gained strength and a resiliency and shaped her into the person she is today.

She reminds everyone to not fear failure, but to fall forward.

“Every failed experiment is one step closer to success,” she finished.

Following Greenberg’s speech, April Aldridge, Letitia Austin, Donna Thompson and Allyson Whittaker sat as a group of panelists and discussed their own triumphs and failures throughout their career and reminded everyone failure is just a step on the way to success.