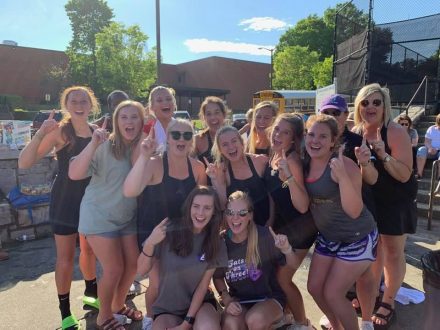 Wednesday afternoon the Lady Cats tennis team battled Riverwood in the Elite Eight on the road. In a nail bighting finish, the Lady Cats won 3-2 and are moving on to the Final Four to be played at home on Monday.

Coach Amy Thomas said she was so proud of her team. Number one doubles, Bree Powell and Jade Stacey began the day with a 6-0, 6-0 victory, giving BHS the advantage. Number two doubles, Sarah Caroline Darley and Anna Marie Hall followed them up with a 6-0, 6-1 win, keeping BHS ahead.

However, in the singles division things were heating up. Number one singles, Sydnee Burke fell 4-6, 1-6 to opponent, Arden McCord. Number two singles, Mikey Harrell won her first set, but number three singles, Gracie Surratt lost her first set. It was down to the wire. Surratt eventually lost to Caroline Eades 1-6, 3-6.

All eyes were on Harrell.

“It was very dramatic,” Thomas said.

Harrell came out victorious though, after a grueling set of three, securing the Lady Cats a spot in the final four. Her final score was 6-1, 4-6, 6-2.

Thomas said she is always confident in her girls, but knew everyone is difficult at this point.

“I was nervous just watching them warm up,” she said. “I knew they were going to be good.”

However, Thomas knew the team wanted to push further than last year, after getting eliminated during the Elite Eight. Thomas explained they put all their heart into these matches and they played as a team and won as a team. Thomas said she will never forget watching the Lady Cats cheer on Harrell while she battled it out. No one was disappointed over their personal losses; they just wanted a team victory, and they got it.

The Lady Cats will now face Kell from Marietta at the Bearcat Courts on Monday afternoon at 2:30.

Thomas hopes to see fans of all ages come cheer on the Lady Cats.

Lady Cats soccer wraps up season on a high…