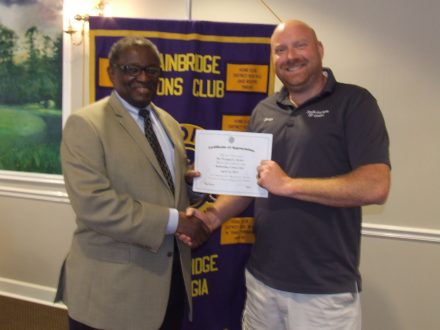 Norman Joyner, interim CEO of the Bainbridge-Decatur County YMCA, told the Bainbridge Lions Club Wednesday that there are a lot of kids out there who would benefit greatly from the YMCA experience.

“I retired from the YMCA of the USA as a network consultant,” Joyner said in opening his comments. “While with the national organization my consultant territory included Florida, North Carolina, which I am a native of, South Carolina and Georgia.”

Joyner said his extensive executive experience with the YMCA organization proved to be invaluable to the services he provided, such as leadership to the international group and successful coordination of the world service campaigns in the southeast for 200 associations for over a 12-year period. He told the Lions that programs like youth YMCA day camps instills important Christian values in our youth.

“We also have a dedicated Christian adult staff working with our youth and adults,” he said.

Joyner further told the Lions that his 35-year YMCA career began at the Montclair New Jersey YMCA in 1967, where he served as the assistant physical director.

“Since 1967 I have been a servant leader in progressive programs and executive roles at YMCAs Pittsburgh, Los Angeles, Winston Salem, North Carolina, and Atlanta.”

Joyner further told the Lions that he also served as network consultant with the YMCA of the USA from 1994 to 2002. In addition, he served as an international consultant for the Y of the YMCAs in Africa and extensive experience with the South African region. He has been recognized as physical director of the year, community service leader of the year, and for many other local and national awards. He retired from his career as a network consultant after 35 years of service and a distinguished career in the YMCA movement.