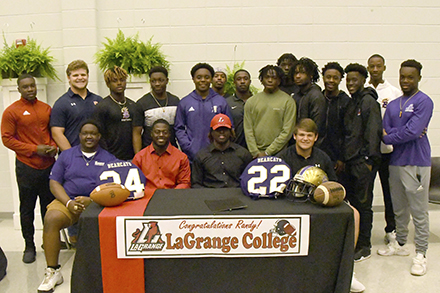 Randy Fillingame and Bryce Worthy, both linebackers who were major leaders on the road to Bainbridge’s State Class AAAAA Championship, couldn’t stop smiling after signing their letters of intent.

“It just feels good having my brother alongside me,” said Worthy. “We were a dynamic duo. It will be familiar playing with each other since we know each other’s game. It will be a good experience.”

Fillingame, who led the team in tackles, couldn’t agree more.

“I get to play another four years with my brother,” said Fillingame. “We have some good memories here at the high school. We are looking to create some more. We’re trying to do good things at LaGrange, academically and on the field.”

Through 15 games, Fillingame racked up 87 solo tackles and 36 assisted tackles. He had four sacks, four fumble recoveries and an interception that he returned for a 56-yard pick-6.

Right there alongside him was Worthy with 68 total tackles, 33 assisted tackles and 5.5 sacks. He had two fumbles recoveries and two interceptions, one of which was a pick-6 to put Bainbridge ahead of Warner Robins 7-0 in the opening minutes of the state championship.

Between Fillingame and Worthy on the leading tacklers list is Roman Harrison, who signed with Tennessee in July.

Both Fillingame and Worth said they liked the friendly atmosphere of the school.

Bainbridge coach Jeff Littleton praised both the two-year starters for their tremendous leadership and worth ethic during the low points and high points of their high school careers.

Both players will continue to play linebacker for the Panthers.