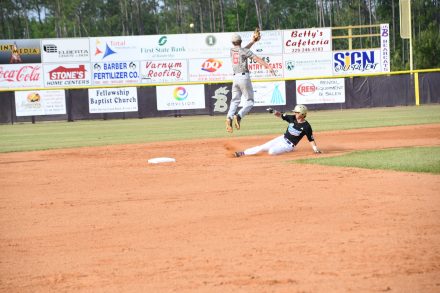 The Bearcat baseball team picked up three wins this week, all in convincing fashion to improve to 12-14 (6-6 region)

Quayde Hawkins drove in four runs. He went 2-for-3 at the plate.

Bainbridge got things moving in the first inning. Hawkins singled on a 2-2 count, scoring two runs.

The Bearcats tallied six runs in the second inning. Hawkins, Colton Harrell, Jackson McCullough, Jaheim Jenkins and Michael Conder each drove in runs during the inning.

One bright spot for Tift County was a single by O Manning in the second inning.

Barr was the winning pitcher for Bainbridge. He surrendered zero runs on one hit over five innings, striking out five.

J Pittman took the loss for Tift County. He surrendered five runs on four hits over two-thirds of an inning, walking one.

Bainbridge racked up nine hits. Conder and Hawkins all collected multiple hits for the Bearcats, both racking up two hits to lead Bainbridge. The team stole seven bases during the game as two players stole more than one. Conder led the way with three.

Manning led Tift County with one hit in two at bats.

Thursday, the Bearcats scored five runs in the third on its way to an 8-1 victory over Veterans on Thursday Game 1 of a doubleheader. Bainbridge offense in the inning was led by Ivan Velasquez and Jackson McCullough, who all drove in runs.

Cayden Sconyers led the Bainbridge to victory on the mound. He lasted seven innings, allowing three hits and one run while striking out three.

Varnadoe took the loss for Veterans. He lasted six innings, allowing eight hits and eight runs while striking out three.

Boutwell, Harrell, and Hawkins each collected two hits to lead the Bearcats.

Bainbridge hit their way to victory on Thursday to the tune of 7-3 in Game 2.

Veterans got things moving in the first inning, when an error scored one run for Veterans.

In the bottom of the first inning, Bainbridge tied things up at two when Nick Barber drew a walk, scoring one run.

Bainbridge pulled away for good with one run in the third inning.

The Bearcats put up three runs in the fifth inning. Bainbridge’s big bats in the inning were led by a walk by Conner Poitivent and a double by Will Beckham.

Kaleb Varnum pitched Bainbridge to victory. He went six and a third innings, allowing three runs on six hits, striking out seven and walking one. Jackson McCullough threw two-thirds of an inning in relief out of the bullpen. McCullough recorded the last two outs to earn the save for Bainbridge.

Blake Ethridge took the loss for Veterans. He allowed eight hits and seven runs over four and a third innings, striking out five and walking one.

Bainbridge totaled eight hits. Wesley Morrow and McCullough each racked up multiple hits for Bainbridge. McCullough and Morrow each collected two hits to lead the Bearcats.

Sturdy defense keeps Brooks County out of goal against…