Cause of accident unknown, says GSP 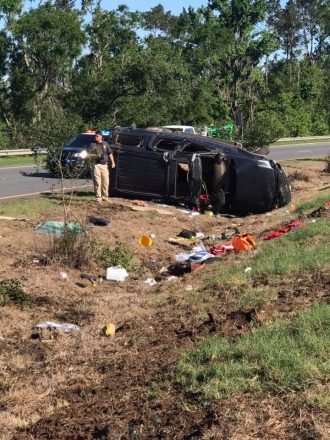 Monday morning, Georgia State Patrol and Bainbridge Public Safety responded to a single car accident at the intersection of Shotwell Street and Spring Creek Road, which left the driver with multiple serious injuries.

According to Trooper Darren Heard, Aaron Clements was traveling south, when he came to the West Shotwell/Shotwell Street exit. When he approached the curb of the exit, he attempted to straighten out the vehicle and ran into the median, causing the car to be overturned multiple times.

Clements was not wearing a seatbelt at the time of the accident and was ejected from the vehicle, sustaining serious injuries. Heard could not comment on the exact injuries, but knows he suffered from multiple different things.

Heard is unsure what caused Clements to lose control of the vehicle, and it is still under investigation at this time.

A year in the States