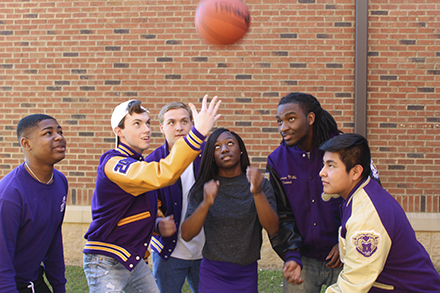 Get ready to “Bop to the top” with all your favorite songs and characters as Bainbridge High School’s drama and chorus department present High School Musical Jr. April 18-20 at the Kirbo Center.

Director, Leigh Powell has long wanted to do High School Musical, because she thinks the production could appeal to every member of the audience.

“I think children or younger students who have never been interested in musicals will like this and adults my age, who watched it growing up on Disney Channel and even older adults just because of its nature,” she said.

The show will feature all the classic songs that the original Broadway production did, but it also includes an audition sequence not seen in the movie and a new song “Counting on you” sung between the braniacs and jocks.

Powell couldn’t have made the production without the help of Misty Tice. While Powell was on maternity leave, Tice spearheaded the project and helped choreograph dance sequences, rehearse lines and coordinate costume changes.

“I have been blessed with her help,” Powell said. “They look very prepared for the opening night.”

Audience members are sure to see some familiar faces on stage this go around, but Powell said they have a lot of underclassmen who joined after the fall production of Beauty and the Beast. However, there is still a lot of seniors who she knows will be hard to replace.

Student and children’s tickets cost $5, while adult tickets cost $10. Powell, along with all the other cast hope you come and join them “breaking free” on the stage.