A year in the States 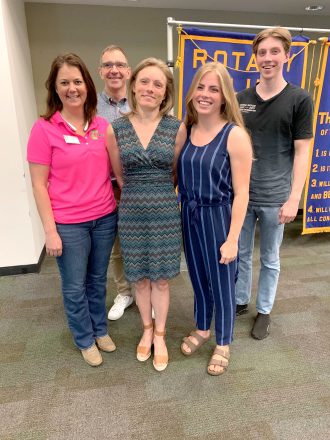 Georgia Rotary Student Program (GRSP) student this year, Pernille Schmidt of Denmark, came to Bainbridge Rotary this week to report on the academic year she has spent attending Valdosta State. Local Rotary host parents for Pernille have been Stacey Cunningham and Garrett  Smith, who have enjoyed her company and escorted her to her very first  football game.

Miss Schmidt gave Rotary members a run down on the time she has spent in the U.S. and expressed her thankfulness for the opportunity to do so.

She said the experience has changed her in ways she will never forget. “I have become more independent and braver” she explained, adding that she is much more comfortable giving her farewell speech than she was her introductory one.

“This year has been crazy,” she said, “I have experienced so much in such a short time.” She told of all the trips she made on weekends and breaks, having visited 12 states from Georgia to New York, and having spent New Years Eve in Miami.

She especially enjoyed her holiday celebrations of Thanksgiving and Christmas.

Thanksgiving was a first for her as they do not celebrate it in Denmark. She spent the holiday with the Smiths. Christmas was different. She accompanied another GRSP student to her host home to celebrate Christmas. She was interested to find the customs of Christmas celebration to be very interesting and so different from the way Denmark celebrates. She attempted to make a Danish Christmas in Valdosta, preparing Danish food.

The breaks and weekends were often spent with other GRSP students, and she found it to be a good way to make new friends.

One trip she found most interesting was when they went to Cuba on spring break.

She defined the country as being so different, and gave a couple of samples to illustrate the difference. They have no supermarkets, and no signs outside their businesses. “You have to look in the windows to see what they are selling, and they seem to have a lot of soap for some reason.” She enjoyed riding in an old convertible car there, and in spite of the poverty she described the city as pretty, with colorful buildings.

Miss Schmidt was joined at Rotary by her family—mother, father and brother— who will be spending the next 12 days with her touring the country. They are planning to go to the Grand Canyon and to Los Angeles to see the different cultures here before she goes back home.

She and her family all speak excellent English, and she explained they begin to study English in the first grade, while still speaking Danish at home.

Miss Schmidt closed her remarks by again expressing her thanks for the wonderful opportunity to come to the United States to study and explore.