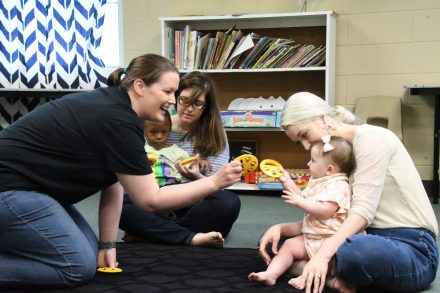 Heather Whittaker shows Vivienne Thomas a musical shaker while her mother, Heather Thomas looks on. Megan Hines and son Micah Hines (2) play with their shakers in the background.

Licensed Kindermusik Educator Heather Whittaker is helping young children to make a joyful noise by introducing early music appreciation at elementary levels. Whittaker has a strong background in teaching. She has a BA and an MA in History and taught at Bainbridge College when she first came to Bainbridge.

Music has been a constant in her life since her childhood. She began singing in a choir when she was in Kindergarten and has played the violin since age 10.

Her first chance to pursue her love of strings, especially violin, viola and cello, came at Grace Christian Academy when she took over their string program that had begun under the tutelage of Charlie Strickland.  She also gives private lessons.

Now she is expanding her outreach by affiliation with Kindermusik International, Inc., a company that has developed a music curricula that has worked successfully for three generations with children around the world. In order to obtain her certification she was required to teach three months of classes at Level one—babies to age one year. She taught six babies for four weeks.

The program offers different levels, depending on the age of the child, and even has a program for families with children of mixed ages.

Whittaker said it is important for children to be exposed to music at an early age, as it impacts all functions of learning. It addresses development of cognition, language, social and emotional, physical, creativity and even math and logic.

Over this summer, beginning the first week of June, she will offer a five-week program for ages zero to two and another for mixed ages. They will be taught at St. John Episcopal Church Parish Hall.

She is also partnering with the Friendship House to teach there one day a week.

In the fall she will expand the teaching to offer a two-year Kindermusik program for young children ages 5 to 7. That is an exciting level for Whittaker as the class includes learning to play musical instruments like the glockenspiel and dulcimer in the first year and the recorder in year two. There are also materials for continued learning at home.

Heather said she learned about the Kindermusik program when she was looking for a way to teach her two young children, Samuel 18 months and Abigail age six. She had been driving to Tallahassee a few times to take advantage of a 30-minute class. She decided that was too far to go for a short class and it was suggested by her teacher that she look into Kindermusik and teach her own classes.

To learn more about the programs offered and to enroll in one, go to the website —ajoyfulnoisemusicstudio.kindermusik.com, or view her Facebook page. She can also be reached by calling 229-416-5844.