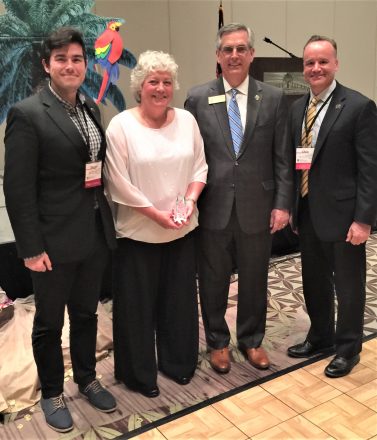 The award is named after retired State Elections Director Ann Hicks, who spent more than 32 years in the Elections Division and served under seven former Secretaries of State, including Bainbridge native Cathy Cox and current Gov. Brian Kemp. It was presented to Heard on behalf of current Georgia Secretary of State Brad Raffensperger and is in recognition of outstanding achievement by a county election official.

State Elections Director Chris Harvey presented Heard the award and cited her and the Decatur County election office’s response to Hurricane Michael, her assistance through the Voter Registrars Association of Georgia’s legislative affairs committee in new legislation that included the recently passed House Bill 316 that will update Georgia’s voting system, and assisting the State Elections Division with information on potential impacts of both ballot-marking devices or hand-marked paper ballots for Decatur County and counties of similar size.

In remarks to the conference, Harvey prefaced the announcement of the award winner by noting the 2016 history-making election and the fiercely contested 2018 midterm election, which 25-year veterans of state elections said they had never seen before.

But Harvey said, “the most underreported story in the 2018 election year was the impact and response that so many counties dealt with just as the General Election was getting underway when Hurricane Michael came ashore and cut through southwestern Georgia like a high-powered leaf-blower.” Harvey recounted his visit the Saturday after Hurricane Michael to several counties in Southwest Georgia as they negotiated hurricane damage while at the same time trying to start advance voting that following Monday.

“In Atlanta, our office worked to track the recovery process and to coordinate the distribution of election data to counties that had no ability to access ENet, the Web or even had electricity,” Harvey said. “One person distinguished themselves in their service to their neighboring counties, while they too were struggling to recover. This person was printing voter lists and providing updates on progress in addition to everything else related to elections. They answered every request for assistance and were commended by their neighbors for their service.

“Simply put, this election director provided exemplary support and service to her fellow election officials, her county, her state election office, and to the entire population of Georgia,” Harvey said. That person was Carol Heard.

Heard said there was a chain of heroes following the hurricane. Within that chain was her husband, Terry; part-time Elections Office workers Margaret Bryant and Carla Robinson and poll workers Suzan Yates, Emma Sales, Kourtney Anderson and other poll workers who all worked extra to complete absentee ballot requests and ensured voting went smoothly; county maintenance director James Coddington who ensured the Elections Office was functioning and made necessary repairs to some of the county’s polling locations; and, finally State Elections Director Harvey, who answered every call, email and question from Decatur County on how best to navigate the election following the hurricane’s wake.

The Decatur County Board of Elections believes that this formal recognition of Heard’s dedication to professionalism, accuracy and the integrity of the voting process in Decatur County will help residents realize just how blessed they are to have someone like Heard as the Chief Elections Official, said Elections Board Chairman Keith Sellars. The Board of Elections officers realized this fact several years ago and now the public can realize it as well.