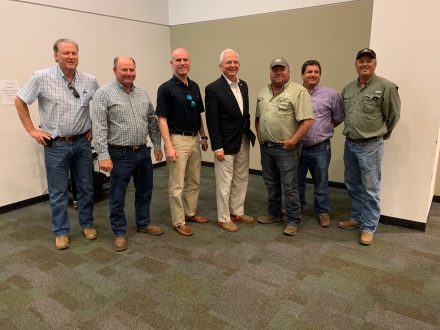 A group of Southwest Georgia farmers were guests at the Rotary meeting this week to hear from Gary Black, Georgia Commissioner of Agriculture.

They were hoping to hear that disaster relief from the U.S. Government was on the way.

Black indicated he wished he had better news regarding the relief. He said he thought the bipartisan work of the Georgia delegation was something to be admired, and he thought they had arrived at an agreement several times only to see it fall apart. He added, “I’ve been studying politics all my life and the more I see the less I understand,” and he thinks that is where they stand in terms of any federal relief for farmers from Washington.

He thought Secretary Perdue had an agreement with the White House, granting $600 million to Puerto Rico and the President had said he would do it; but we still see different forces keeping us apart.

The original agreement for Puerto Rico was upped another $500 million and the President backed out. “Relief to our farmers is hanging on relief to Puerto Rico.” Black said Puerto Rico has already received billions of dollars.  He urged all to continue to keep calling your leadership persons about this disaster package that needs to get done.

“We need to keep the pressure on. I believe it will get done, but can’t say when.”

Black said there were a lot of champions here in Decatur County and Senator Dean Burke has worked hard for relief packages and loan packages. He stressed, however, that FEMA has nothing to do with agriculture and that is why there is a need for a separate disaster relief package.

Commissioner Black then spoke of what he called prospects or opportunities for the future, specifically in the export marketing of pecans, peanuts and cotton.

“There is so much more to do with international branding.” Although he cited 28,000 acres or 20 percent of pecans were lost in the Hurricane, it is still a diverse market product. He said they are working closely with the USDA to go deeper to new markets in such places as Indonesia and Taiwan, and he expects the Chinese market will come back  in spite of the tariffs. “We think we can take the model we use of promoting Georgia grown products straight to the grocery stores.” He gave as example a group of cattle farmers from middle Georgia exporting Ga. beef to China. They brought the packer from Nebraska and feed lot owner from Iowa had a Chinese counterpart of national broadcasters in their offices recently to do an educational program for consumers. “If we can ever get past the government to speak directly with consumers,” he posed. “We wrapped up talking about food safety, and they trust our system greatly.” Finishing up, we told them, “We’d like to see a burger a week from each of you.”

At the closing, Paul Trulock suggested Commissioner Black sing the Pledge of Allegiance, stating, “This guy can really sing.”

Black countered with the suggestion he sing, “God Bless America” and everyone else can sing along with him. They did, and that guy really can sing.