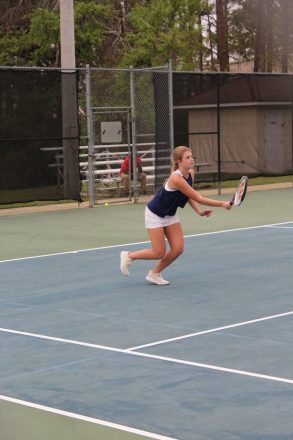 Grace Christian Academy varsity tennis team is headed to region on Wednesday after a successful season for them and their middle school JV team.

Coach Rhonda Wells said this has been a great season for the team. The varsity team won their head to head against Sherwood Christian Academy and Fullington, with the boys only losing to Citizens Christian Academy.

The team is comprised of seven girls and five boys. With only five boys, the team goes into the matches with a bit of a handicap, said Wells. They have to automatically forfeit one game, but number one and three singles are usually able to create a win.

Going into region, Wells is confident.

“If the girls can beat Citizens, we will win region,” she said. “They can totally do it all they have to do is just get it in their mind.”

Wells believes number one boys doubles, Jeb Smith and Chasen Wood, can win region and win state. The duo fell just short last year, but Wells has confidence this year the title is all theirs.

Another player she expects to see win region and head to state is daughter, Caroline Wells. Caroline has already beaten everyone in region and just has to finish the job on Wednesday.

Caroline said she was disappointed in her performance at state last year, but plans to make a comeback this year.

“If everyone plays their game, we can all advance to state,” she said.

Wells also pointed out one other key senior player to watch. Thad Whittaker has played singles on and off, but this year Wells said he has really stepped it up and she expects to see him have a fantastic finish to the season.

The region tournament on Wednesday will be hosted at Bill Reynolds Tennis Center and feature Fullington Academy of Pinehurst, Sherwood of Albany and Citizens Christian of Douglas.