Rotarians hear of progress being made at the YMCA 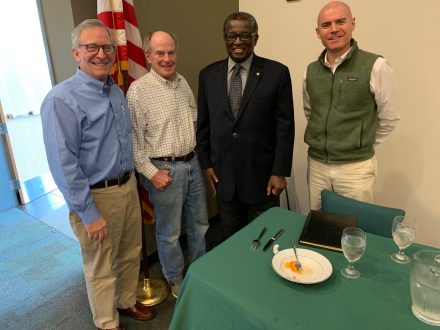 Interim Director Norman Joyner has spent 51 years working with YMCA’s across the country. He has been in Bainbridge since January 2 doing assessments on the Y, and working out plans to make a difference.

He came to Rotary this week to talk about all the local Y has to offer, along with the improvements being made in both the facility and in the programs offered.

He was adamant that the YMCA is not going to close.

“The Christian mission speaks for itself,” he says, adding,  “We make a difference in lives of people of all ages.” He went on to speak of the rich history of the Bainbridge YMCA.

Joyner pointed out some of the progress being made is because so many are supportive of the Y. He stressed that he is only an interim, but said, “I am very optimistic that we will find someone to take on the responsibility of CEO of the Bainbridge YMCA.”

Suzanne Brandt has retired as the CEO, but is still there on a part-time basis. He named Marisa Jasinski, who is in charge of youth care program, as an outstanding leader and he anticipates a successful summer camp program.

“I feel good about the quality of that program,” he added. That department has increased, with 35 to 40 kids enrolled. He hopes to double that enrollment when school year 2019-20 begins.

Joyner said the Senior Silver Sneakers program at the Y is one of their best programs, and used regularly by seniors of the community.

He also praised  Kim Mills who is in charge of the Wellness Program, saying she does a  great job.

Another project is to redefine the leadership, as changes are occurring in the board members. He stressed the need for volunteers on the board and in other program areas.

Another asset he named were the soccer fields in the back. He named it a priority to develop and he is looking for an outside program to coordinate with the Y on the soccer program. He called for more people to join the Y, indicating that membership is already increasing.

The current number of members is 2610 and he believes by the end of May he number will be 2750 or above. This is the largest increase over the last few years.

He promised a future fund raising campaign that will be focused on the improvement and quality of programs.

Rotarian Paul Trulock asked to speak on behalf of the aquatics program. He said the hospital’s physical therapy department has excellent therapists who are trained in deep water therapy. He is making good use of that program.

Joyner added that the pool is a clean and healthy facility. Staff have been manually added the chemicals up to now, but a manual feeder has been ordered, stating, “It will increase the value of our wellness area.”

Joyner said the finances are some better after three months. “We use cash flow to pay all our bills. We have made very good strides in finances—we are not where we want to be, but we are on our way.”

A question from the audience wondered if there was a possibility for the YMCA to partner with the City Recreational Authority on programs such as the soccer program. Joyner responded he didn’t know why they couldn’t. It was a task to work on.

Board of Elections to receive comments, discuss potential change…