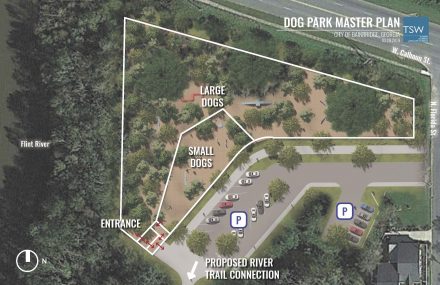 City Council attended their annual retreat this past weekend in Callaway Gardens, where they discussed multiple legacy projects for the city of Bainbridge, including a dog park.

Kristin L’espernace, an associate project manager at TSW Planners, and Bryan Bays, lead designers, presented the Council with a rendering of what her team has envisioned for the dog park. The park would be located in the grassy area that is between West Calhoun and Florida streets. The land was donated to the City, because it is not developable for anything else with the sloping land features. However, the City thought the area would be perfect for this usage.

The entrance would be at the end of a walking trail that has corralling for both bigger dogs and smaller dogs, so they cannot escape when the gate is opening.

L’esperance suggested the City consider using mulch inside of the park, because grass will likely be torn up from dogs playing and digging. The park would also include the wooded area once the underbrush was cleared.

City manager, Chris Hobby thought this would really create for a great place for the dogs to play and still keep with a historic look because of the large oak tree planted near the woods.

The City has multiple park projects in store over the next few years, so they know this would be a relatively inexpensive project. They would use old pipe sections to develop dog agility training courses, instead of purchasing premade ones.

“Little dogs can walk on top of the piping, while big dogs can run through it,” Councilwoman Glennie Bench said.

Bench also would like to see the park be listed on bringfido.com, which is something her pet friendly Inland stores are on. The website lists places that are pet friendly and are great stops for people with pets when traveling.

“I think it would entice travelers to come,” Bench said.

There is currently no set date for when the park will open, as the opening hinges on the parking that will have to be created.