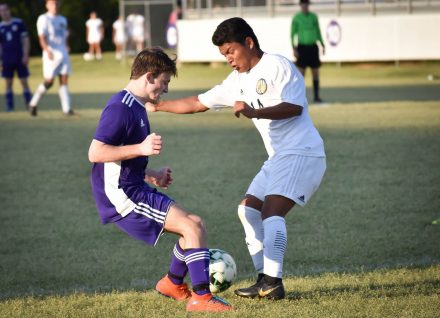 Caleb Harris challenges a Thomas County Central player for control of the ball during last week;s game against the Yellow Jackets. Harris had two goals in regulation.

The Bainbridge High School Bearcats suffered a heartbreaking defeat in an action-packed match at Centennial Field on Thursday, March 28th to the Thomas County Central Yellow Jackets, 5-4, in a penalty kick shoot-out.

The match began with both teams playing very evenly.  In the 14th minute, Central broke the deadlock when an attacking player found space at the top of the Bearcat penalty area for a successful shot on goal.

The Bearcats’ intensity and focus was obviously impacted as a soft pass in the midfield was intercepted following the restart from the kick-off set Central up for another open opportunity in front of goal in the 15th minute, which was also on target and successful.  The Bearcats regrouped and fought to get back into the game from that point on, though.

In the 38th minute, two minutes before the half-time whistle, the team’s effort was rewarded when Caleb Harris took a spectacular pass from Mason Ard and finished for a goal to cut the lead to 2-1.  The goal uplifted the team, and gave them hope and confidence as the second half began.  The score remained 2-1 until the 71st minute when the Bearcats had another breakthrough to equalize the score.  Stokes Moore provided a well-timed pass to Angel Munoz who converted the pass into a goal.  As the clock ran out, the score remained 2-2, so the teams headed into a fifteen minute extra time period.  Only two minutes into the overtime period, Central scored a goal to go ahead 3-2.

The Bearcats demonstrated resolve and determination as they soldiered on creating chances and thwarting Central attacks on their goal.  Their resolve paid off in the 92nd when Caleb Harris scored from another assist from Mason Ard.  The overtime period ended drawn 3-3.  From there, the teams advanced to a penalty shoot-out.  When all the dust settled, Bainbridge converted four of five opportunities from the penalty spot, while Central converted five.  Although they fought with courage and determination, the Bearcats came up just short of victory.

Coach Rick Lewis commented, “I am so proud of team’s character and play during the match.  They played with such determination and resolve all night long.  There is no doubt that they gave everything that they had to be successful.  It hurts to come up short in these types of matches, but the players have nothing to be ashamed of at all.”

Coach Jamie Ard agreed with Coach Lewis’ comments as he was also greatly impressed with the team’s resolve.

He came up with big save after big save to keep the Bearcats in the match.  Caleb Harris really came to play on the evening as well, as he finished with expected proficiency.  Mason Ard performed well in a position new to him as he attacked from wide areas and looked dangerous to score or assist in a score all night.  Cesar Chiguil and Nix McIntosh worked tirelessly.

Alex Soden and Matt Hall played very well as they were new additions to the back line of defense for this match.  Alex was particularly dominant playing alongside Tom Emmons, Andru Matthews, and Colin Morrison.  Many players saw action during this important game as well, including Tristan Brannan, Kendall Glover, Bryce Jones, Luke Emmons, and Jose Avalo.

The Bearcats will look to get back to winning on Tuesday, April 2nd in Warner Robins versus Veterans High School.