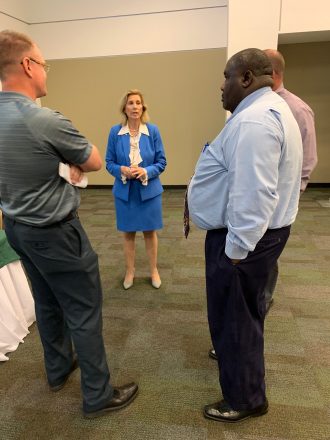 She began her presentation by showing the footage of the final minutes of the BHS state football championship game, as she added that 250,000 people were able to see that game on GPB.

Ms. Ryan said that growing up in Los Angeles she didn’t know much about football, but that when she took the job in Georgia she travelled the state talking and listening to the people and learned their passion for football. That is when they started regular Friday Night Football broadcasting, a program they do every week in the season.

Another fact about GPB is that it is the third largest public broadcasting system in the nation, coming after New York and Los Angeles.

Ryan said she was familiar with Bainbridge, as they were here following Hurricane Michael. “We were here and we keep coming back,” she declared, as they have done 15 stories about this region.

The biggest thrust of her talk to Rotary was what GPB is doing for education. She described how 90,000 K-12 teachers have downloaded material from the GPB digital educational offerings. The company also does the training of the teachers state-wide on how to use digital education. The need for this was brought home with the demonstration of the Georgia History Textbook that students have been using for 10 years.

The school systems could not afford to update and publish a new book. So GPB purchased the copyrights, brought the information up-to-date and completely digitized it. “And it is FREE ”she emphasized.

This a key factor for school systems that purchase their own books. Another advantage that is special for parts of the state without Broadband or students who have no computers in their homes is that they can download the digital lessons on their cell phones and take them home to study. “Education is the most important thing we do,” she claimed.

Another programming aimed at students is Live Explorations that allows students to watch presentations live and even ask questions of the panelists or presenters.

With school districts seeing funding cuts, many have had to cut field trips.

To answer that need, GPB has programed 40 virtual field trips, such as the one they have done of Cherokee Nation.

Two complete courses in Physics and Chemistry have been developed for schools that might not have the teachers for those subjects. GPB can teach teachers, preferably a science teacher, to utilize the digital coursework.

Saying that seven schools in this area have signed up for the field trips. She encourages school officials to be sure they know how to access these teaching aides.

“Please invite us down. We truly want to help.”

Using a map, Ryan showed how they have 18 radio stations cover 90 percent of the state. The white area on the map is the other 10 percent in Southwest Georgia, specifically Decatur County, “We don’t have coverage here, and we think you are missing a lot,” she explained; adding that the only available public radio stations available here are from Tallahassee.

Adding that Georgia Public Broadcasting is free, she offered a free antenna to anyone who needs one to access them the old fashioned way.