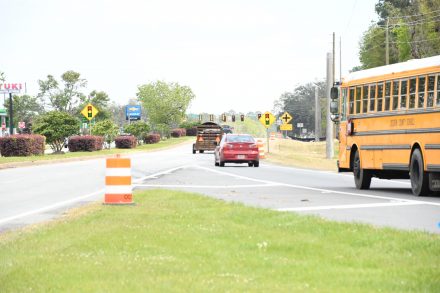 GDOT project manager, Jonathan Horne said the department plans to implement a traffic light to help alleviate some of the dangers.

“We will be putting in a red light that goes into the driveway of the gas terminal,” Horne said.

Shotwell Street will no longer transition into State Route 38/Highway 84, going straight into Cairo. Instead, the street will curve into the Bypass and dead end at the traffic light, where traffic can turn into the gas terminal and Yuki.

The traffic light is being implemented for safety reasons Horne explained.

“It’s unsafe for the semi trucks to cross all four lanes of traffic with other cars coming and this will help with that.”

According to the GDOT Project Justification Statement, “based on engineering judgment, it is believed that the use of a traffic signal along with roadway realignment at the location would greatly reduce crash frequency and or severity.”

The Federal Highway Administration agreed and believes “the implementation of a properly placed traffic signal will greatly reduce the redundancy of angle crashes.”

Horne said the project has not come across any holdups yet and is set to be completed by June 30, 2020.

Horne does realize their location makes it difficult during school drop off and pick up, so he wants drivers to be aware that he and his crew will not be working in the road before 9 a.m. or anytime when school is letting out. He still asks that that drivers slow down in their construction zone and be aware of the work taking place and people out there completing it.