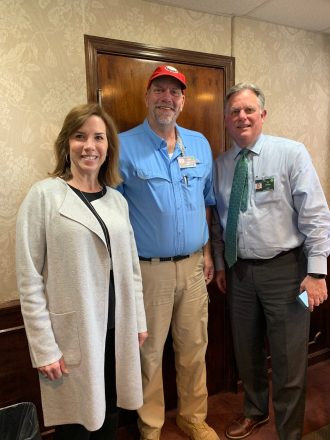 The Hospital Authority recognized John Manchester as the recipient of the Shining Star Award. He is a employed in the maintenance department and was nominated in recognition of his long hours worked and his positive attitude of helpfulness, especially during the aftermath of the hurricane, when he made numerous trips between the hospital and Willow Ridge carrying gas to fuel the generators.

Four months of positive net income have now been recorded by Memorial Hospital and Manor. The net income figure for the month of February was $462,697. There is one more month to go in this fiscal year.

Other interesting figures to track are the number of admissions for the month. February saw 163 admissions compared to130 in February 2018. There were 106  MRI procedures done and 533 Cat scans completed for the month. These figures are of interest as the board heard from Lee Harris, administrative assistant,  of a proposal to replace the existing MRI, a 2004 Siemens housed in a mobile coach that has been located at that site outside the hospital for the past 12 years. It is currently operating under a month-to month lease. The Board approved the proposal to replace it with a 2009 Toshiba that is quieter, has improved image quality, shorter scan times and a bit roomier. It will be housed in a new modular building two times the size of the one now being used. There will also be a ramp built to meet ADA specifications. There is only one technician here now, but there is a plan to hire one and train more staff in order to have backups available when the need arises. The monthly expense for the Toshiba will be $26,337. Harris said he believed the MRI would be profitable if it is promoted, and the unit will be owned by the Hospital at the end of six years. The first of August is the targeted date to be operational.

One other capital equipment purchase that was approved was a Zeiss field analyzer for use of Dr. Eric Aldridge that helps detect and monitor glaucoma. Total five-year cost was $36,312.

An interesting presentation on patient safety training for nurses was given by Brandi Fitzgerald, director of quality management. The Georgia Perinatal Quality Collaboration has provided information on obstetric hemorrhaging, a big problem nationwide, especially in Georgia. Nurses must now measure blood loss. They will also soon be receiving additional training for newborn assessment, thanks to a grant that funds the initiative.

CEO Jim Lambert gave several updates in his report. The medical detox program will open for service on April 2.  The Wound and Vein Center is also making good progress toward the projected opening date of May20. The former urology office is being updated to house the clinic.

A proposal to provide scholarships for current LPN’s to enroll in the ABAC RN bridge program is being worked on. MHM currently has six LPN’s working at the hospital that would like to obtain their RN degree. Sources of funding are being explored.

The Authority approved continuing to use the services of Draffin & Tucker CPAs for audits and attorneys Alston & Bird; Lee Durham; and Tom Conger.