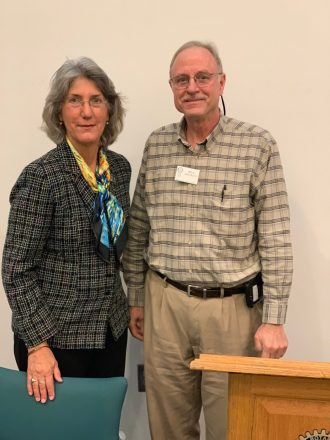 Linda Buchanan. President of Andrew College located in Cuthbert, Randolph County, was the speaker at Bainbridge Rotary on Tuesday.

She spoke of how Andrew College is working to improve the rankings, growth and appearance of small town Cuthbert in the time she has been there. She has been president of Andrew College, an affiliate of the United Methodist Church, since 2015.

She cited a Health Survey conducted annually by the University of Wisconsin that measures every county in every state, saying the six lowest ranked counties of the 159 counties in Georgia are in Southwest Georgia.

She also notes a decline in civic club memberships and church attendance, all she attributes to the rural social fabric.

The message she has for all in this region is, ”Stop beating yourself up. It’s not something you’ve done.” Don’t apologize for it, but instead recognize the situation and get busy reinventing and repurposing.  Saying that education is in a state of constant flux, she adds the schools are always trying to keep up with the vocational workforce needs.

In answer to some of those needs Andrew College offers a thriving two-year nursing association degree program with 60 students; thereby filling a big need in Southwest Georgia for nurses.  But a common complaint she hears from employers is that they can find and hire good people, but they can’t keep them. They don’t want to live here and they move on.

Colleges, such as Andrew College are working to revitalize the downtowns by creating places students will want to go. She specifically referred to the improvements being made in Cuthbert, revitalizing the vacant buildings and putting in businesses that people will want to patronize.  They are having murals painted on some walls of buildings, and hosting events, such as the Jazz festival.

In addition to nursing, Andrew will offer a respiratory therapy program in the fall. They have BA degrees in business and want to offer elementary education program.

The enrollment at Andrew is 300, and has been 300 for too long a time, according to Buchanan.

She says they have to grow and want to prepare students for the workforce, while doing all they can do to help Cuthbert and Randolph County economically.

The Samaritan Counseling Center to open satellite offices in…