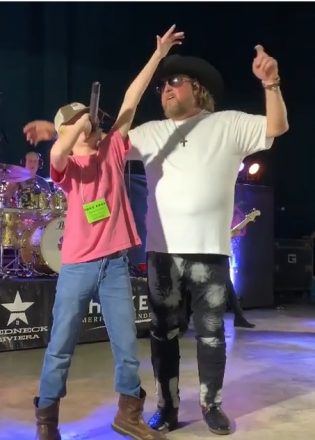 Saturday night was a dream come true for 12-year old Mason Holder, who got to sing onstage with Colt Ford.

Holder had won passes to Ford’s backstage meet and greet through a competition the Chamber of Commerce held. The Chamber had fans submit themselves covering one of Ford’s songs and the winner got to meet him. Holder covered “Riding through the country” and won. He then went on to meet Ford, who asked him what his favorite song was. Holder explained this particular song was one of his favorites, so Ford promised him he would pull him up onstage during the song.

Holder never expected Ford would let him sing the song in front of the masses.

“That was my dream come true,” Holder said. “Nothing could ever top that moment.”

Holder knows Ford’s songs from the radio, but his fandom extends beyond that. He listens to Ford’s songs everyday on his headphones when he gets home from school and has sung one of Ford’s songs in his school talent show.

He said some of his favorites include “No trash in my trailer,” “chicken and biscuits,” and “Driving around song.”

Although Holder had performed in front of crowds before, nothing prepared him for such a large crowd on Saturday night.

“I was in shock, Holder said. “I didn’t know what to think, but I just tried to look above the crowd and sing the best I could.”

Holder will never forget this special memory and thanks the Chamber and Ford for giving him the opportunity to be a part of the performance.