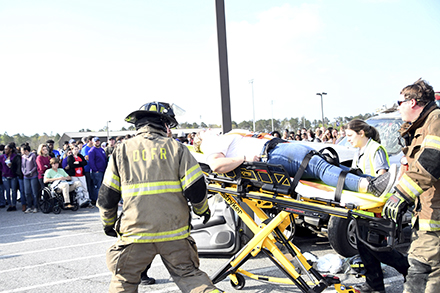 GSP officer, Bryan Palmer began with a presentation and giving quick facts to students that they may not have already known. Palmer told the students approximately 40,000 road fatalities happen a year and more than 10,000 of them are because of a DUI crash; 7,000 of those impaired drivers had a BAC of .15 or higher, despite the legal limit being .08 for those 21 and older and .02 for those who are younger.

He explained that 1,200 of those killed in DUI crashes were kids who will never see their graduation day, all by an accident that could have been easily avoided.

Palmer told the students all the various way alcohol impairs your driving.

Palmer also cleared any misconceptions about ways to “sober up quickly.” He asked students if they had ever heard that eating a greasy meal would help them absorb the alcohol or exercising, which most students admitted to hearing. He told them that is incorrect; the only way to get rid of alcohol in your system is to give it time and wait it out.

Palmer pointed out different BAC levels and how they impact the body when driving. At a .08, people can experience loss of small muscle control, impaired judgment, vision impairment and slurred speech, however people can still be arrested at .05, if Palmer can prove they are a danger to others on the road.

Palmer told the students when they conduct a field sobriety test it’s not one they can study for no matter how many YouTube videos they watch. The police will catch them.

He also explained they can get a DUI while on drugs and showed the students a video of someone who coded after crashing while on drugs.

Palmer said he knows students will still not heed his warnings, but he wants them to realize they are at more of a risk than just hurting themselves. They can hurt their friends and those closest to them.

“Look around, these are the people you’re hurting,” he said.

Following the conclusion of Palmer’s speech, the students were escorted outside where a wreck involving their classmates had been staged. Lauren Howard acted as the drunk driver, who had to be extricated and put on a stretcher along with passenger Abbey Gardner. The other passenger, played by Shy’Tavian Jenkins was deceased on scene.

EMS arrived and placed the passengers in the ambulance to drive them away.

The hope for this was that students would relate when it was one of their own classmates.

Paramedic Tyler Pollock was happy with the turnout of the event.

“I think the students did great. It was very well done and I’m blown away with the turnout,” he said.

Senior Luke Jones was impressed with the presentation as well and said he thinks it was a great reminder to the student body, especially with prom next weekend that there is zero tolerance for drinking and driving.

Crowds turn out in full force for huge River…