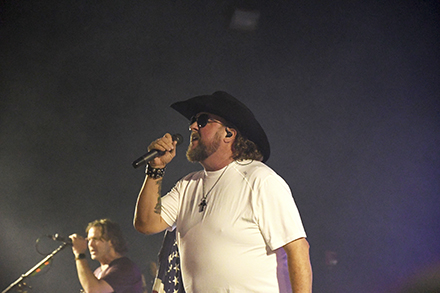 Those who spent the weekend at the Boat Basin celebrating River Town days may have noticed the lines seemed longer and the crowd seemed to be pouring in. They are correct; the crowd for this year’s festival doubled from years previous, amassing 10-12,000 people.

However, with the extra day this year and the entertainment draw in the number doubled. Minor said they based their calculations off of the food vendors and the amount of food sold. She explained the vendors sell food at festivals of all sizes and the amount they sold would be equivalent to that of a 12,000-person range throughout the three days with the bulk of people attending Saturday.

Minor said they didn’t expect that amount of people at all and they had no idea that many people would attend Colt Ford, but it was amazing.

Minor said she attributes this growth to the addition of new events such as the FLW fishing tournament, a Saturday night concert featuring Colt Ford, and more activities such as the hot air balloon which unfortunately, due to strong wind gusts, wasn’t safe to fly during the event.

“We are incredibly pleased with this year’s festival and the positive impression it made for Bainbridge on those who visited the festival from the southeast region,” Minor said.

Minor believes this year’s festival really casts a positive light on Bainbridge, as she saw many driver’s licenses from states surrounding the area. She hopes the event will continue to draw in visitors for years to come as they work hard to improve and make the event bigger and better every year.