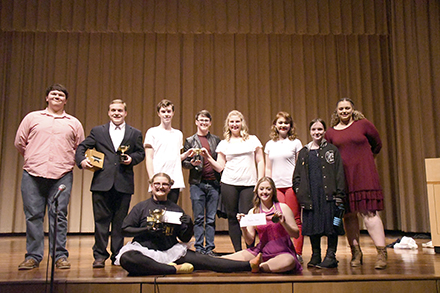 The students all tried out in a preliminary competition before being selected as the main acts for the talent show, once selected they performed on stage and were judged by Mr. Aston Bryant, Ms. Misty Tice and Miss Kaitlin Floyd. In addition, students could also win the people’s choice award through donations received during performances.

The night began with Samantha Rabon’s vocals to “Lips are moving” and was followed up by Seth Jones and Marla Sims Mary Poppins dance to “supercalifragilisticexpialidocious.”

Wesley Lamb then sang to “I won’t let you go” before Hannah Bell and her cousin, Caron Baulkman sang a duet to “Stay.”

Ashlyn Brock performed a dance, while singing to Chicago’s hit, “Can’t do it Alone” complete with cartwheels, shimmies and the kicks to match, receiving a round of applause from the crowd.

Savannah Waddell then sang “Rolling in the Deep,” while the crowd clapped along and stomped their feet.

Following Waddell’s performance, Harley Blocker performed a glow dance in black light. She painted her jazz shoes in neon and wore a neon facemask with an all black unitard and freestyle danced, drawing attention from the student section.

Michelle Perkins sang “If I Ain’t Got You,” before John Ingram performed a song from Hamilton titled “Hurricane.”

The final performance came from Micah Langdon, who sang “Don’t Stop Me Now,” complete with an air guitar and all the motions.

“It feels amazing to win,” Blocker said. “I might be moving to Germany this year, so it was great to participate with these people.”

Blocker said she has not taken dance lessons; she just got up on stage and danced to what came naturally. Blocker thanks everyone who supported the drama and chorus department Monday night and is excited to see what will come next.