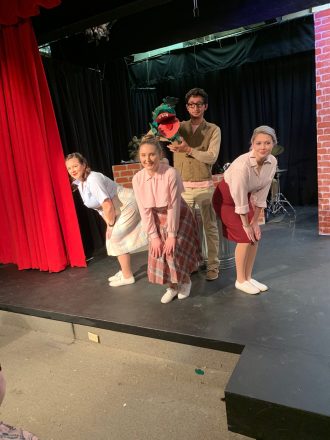 If you have never seen the movie Little Shop of Horrors you might misunderstand the plot and theme of the play. It is truly a dark comedy, but a fun one, and not to be taken seriously.

Imagine a florist who loves strange and interesting plants. He acquires a talking plant that is also much like a flytrap, as it lives and grows by eating blood.  As the story plays out, the plant becomes enormous and reveals itself to be an extraterrestrial plant with the goal of taking over the world—one bite at a time.

The film came out in 1986 as a rock musical comedy horror film. It starred such comedic actors as Steve Martin, Bill Murray, Jim Belushi and John Candy. That, in itself, should tell you a lot about the play.

It is also a musical show with snappy, peppy songs, such as “Grow for Me,” “Somewhere that’s Green,” and “Feed Me.”

It is a show that is all in fun. The cast has great fun and the audience should also.

The “talking plants” have been created by Rachael Crager, current Chair of the BLT Board of Directors, who has made the puppets in several growth stages. She tops it all off with the giant, talking, man-eating specimen named Audrey II.

The show opens at the Bainbridge Little Theatre Thursday evening at 7:30 p.m. and continues evening performances Friday and Saturday, ending with a 2:30 p.m. Sunday matinee.