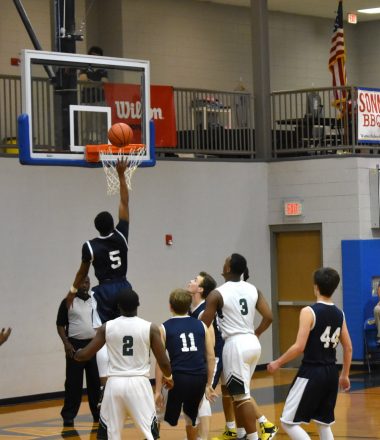 Saturday afternoon the Grace Christian Academy Cougars traveled to Tattnall Square Academy in Macon for the state championship against Highland Christian. The team fought hard, but ultimately came up short 88-64.

The Cougars led in the first period, scoring 20 points, but weren’t able to hold off Highland in the second period, letting them score 30 points at the net. Highland continued to outscore the team in period three, gaining 24 points, while in period four the Cougars went neck and neck, scoring 17 points while Highland scored 18.

Jaylen Jones scored the most points during the game with 30, making 13 two-pointers and four free throws.

Wyatt Carpenter was right behind him, scoring seven points, followed up by the help of Branch Austinson.

The school is still very proud of the Cougars and their title of state runner up.

“Our school is beyond proud of these eight young men who handled themselves and played to the best of their ability,” Kellie Dollar praised.

This ended the Cougars winter sports season, but they now are focusing on a successful spring sports season and warming up for that.

Smith to be inducted into Sports Hall of Fame