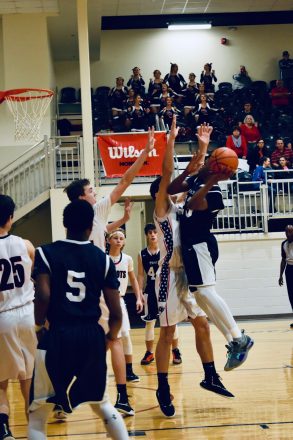 The Grace Christian Academy Cougars basketball team is headed to the state championship after a playoff win against Citizen’s Christian on Thursday night.

The GCA Cougars have not won a basketball state championship since 2008, so they were giving it their all Thursday night to make it to the Championship in Macon.

Seth Parker was the star of the show in the second quarter making five three-pointers, while Jones scored four points and Rogers scored two.

The competition heated up after halftime, when the team only scored six points in the third quarter. Carpenter, Jones and Rogers all scored two points.

The team gave it their all in the fourth quarter with Parker making another three-pointer, followed by Rogers scoring four points, Carpenter scoring three, Jones scoring two and Smith scoring one.

Coach Shavon Brown was proud of the team’s 54-49 victory.

“These young men have sprouted into a championship contender over a course of a season,” Brown said. “Citizen’s Christian Academy is a great, well-rounded team, top to bottom, & perseverance is what we needed Thursday night and the team succeeded.”

Brown compared the team’s success to bamboo growing, saying in the right place and with proper care results will show.

The team will now play Highland Christian at Tattnall Square Academy in Macon on Saturday night.

“Our next opponent, Highland is also a great team with their own style & we meet at the one game that all champions hope to reach when starting a season,” Brown finished.