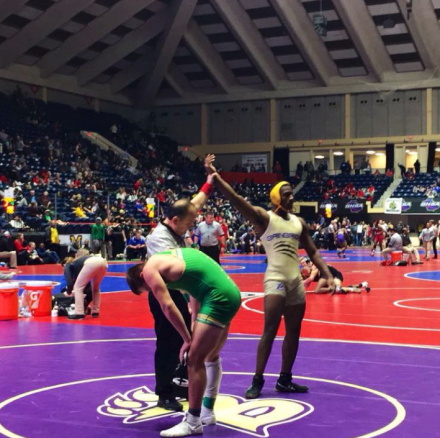 The Bainbridge wrestling team traveled to Macon Tuesday for the GHSA state finals, where the Bearcats made a statement and set up what is looking to be a strong season next year.

Wrestler Arkeavious Marshall finished 8th at sectionals, making him a 16-seed in the first round of the finals for a pairing against a 1-seed. Marshall went up against a wrestler from Buford, and pinned him to win the match.

“After doing some game planning and watching video on Buford, we were both confident that he had plenty of holes in his style and technique,” said coach Chad Smith about Marshall’s Buford opponent. “Our plan was not to be better for three whole rounds and beat him, but to catch him in his mistakes and finish it early. That’s exactly what Arkeavious did.”

Next, Marshall drew the 4-seed from Veterans, who Bainbridge had wrestled at sectionals and lost by points. Smith said he was very strong and aggressive, and unfortunately he lost by points again to him.

After that, Marshall fell to the consolation bracket to fight back for third place. He drew the 6-seed from Whitewater and pinned him in 32 seconds of the first round.

Next he drew an opponent from Rome that was the 3-seed and very talented, according to Smith. He pinned Marshall in the second round, ending Marshall’s tournament with a seventh place finish.

“This was Arkeavious’s first trip to the state finals, and he was excited and overwhelmed at the same time,” said Smith. “He had a great game plan and it showed as he advanced to be the seventh best 195-pound wrestler in the state at 5A. There are 62 of them and he is the seventh best. That’s something to be proud of as a coach and a wrestler.”

Marshall was only one win away from receiving a medal.

Being in the Top 10 of an individual sport is a huge accomplishment, said Smith.

“It’s like being one of the 10 best running backs or quarterbacks in the state or even a top 10 pitcher,” said Smith. “It’s tough to do that or have that accomplishment. I look for (Marshall) to be my starting 220-pounder next year. We have sat down and devised a workout plan with specific supplements to get him that extra 20 pounds of muscle mass he needs. I am willing to bet he places next year in the Top 3 of the state finals.”

Smart to be inducted into Sports Hall of Fame