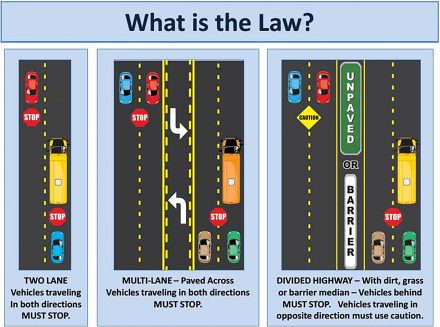 Georgia Gov. Brian Kemp signed his first bill into effect last Friday with Senate Bill 25, which will immediately improve school bus safety for children and families in the state.

Georgia law now requires drivers traveling in both directions on two-lane roads and roads with a center turn lane to stop for school buses that have their stop arm extended and red lights activated. Vehicles traveling in the opposite direction of a stopped school bus on a road that is separated by a concrete, grass or dirt median do not have to stop, but drivers should exercise caution while driving in this area.

“First of all, I want to thank House and Senate leadership – and all members of the General Assembly – for their unanimous support of this important legislation,” said Kemp. “Republicans and Democrats all recognized that swift action was needed on this issue. When it came to ensuring the safety of our families and our children, I am proud to say that we all stood together. I would also like to thank the two bill sponsors, Senator Bill Heath and Representative Ginny Ehrhart, for their hard work on S.B. 25.”

School buses in Bainbridge and Decatur County stop frequently in the mornings and afternoons to let children off at their stops. The new bill will help to continue ensuring their safety.

“This was a team effort – from the General Assembly, law enforcement, educators, and concerned citizens – to do the right thing and help save lives,” said Kemp. “As my first bill signed into law as Georgia’s 83rd Governor, S.B. 25 shows that there are many important issues here at the State Capitol that we can all agree on. I hope S.B. 25 serves as a model as we move through this legislative session, and in the coming years, of what Republicans and Democrats can accomplish together to keep Georgians safe.”