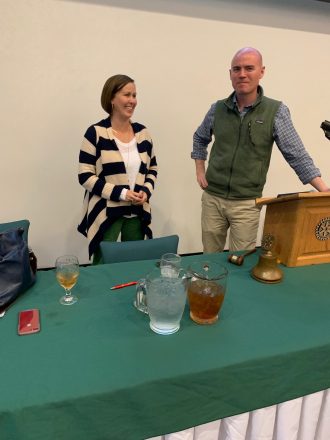 Downtown Development Authority Director, Amanda Glover, gave the Rotary Club a report on the growth that occurred in 2018, as well as the expected growth to continue in downtown Bainbridge through 2019 and beyond.

She reported that 23 buildings in the downtown were sold last year and gave some information on the buyers and their plans. There were also seven new businesses created downtown, adding 55 jobs.

The City is now participating in the Georgia Placemaking Collaborative that focuses on what the community wants and the actions that need to be taken to achieve the goals. It stresses the economic development that results in creating places people want to come downtown and enjoy. The Collaborative has a three-year planning period.

The Broad Street Alley project is expected to be completed by April 15 and there will be a public dedication on May 1. That is just before the American Blue Grass Festival scheduled for the first Saturday in May.

Other projects underway are the Callahan Building that was so damaged during Hurricane Michael. The eight-foot concrete nameplate mounted in the front that protruded above the roof, broke off and fell through the roof, causing much water, falling brick and floors damage. That building has been purchased by Contractor Doug Young who is now working on restoring it and already has a waiting list of people who want to rent an apartment. This includes many of the former tenants.

The Young Fashion Building on the corner of Broad and East Broughton has been purchased by a family from Thomasville that plans to open a business there. They are remodeling and repairing it.

It includes plans to open up a small portion on the Broughton Street side to install public restrooms for the downtown. The next building in line has been purchased by the Anwars who are also repairing and remodeling it to create downtown upstairs apartments, which are in great demand, according to Glover, who says existing ones are all full and have waiting lists.

Glover showed photos of several downtown buildings as they appear now, and drawings of what they can become in the future.

If all these come together, the difference in the appearance of the downtown area will be exciting and welcoming to visitors as well as residents.

She mentioned the completion of Diablos restaurant on the West side of the square and how it has improved that area. She said they are open seven days a week to serve the public. Also discussed was the Southern Brewery building on the south side of the square that is coming along and expects to be open in April. She added they are installing a large stone pizza oven, and drawings were shown pointing out a sliding door that will open to the new Broad Street Alley.

Much of this growth has been accomplished through the R.U.R.A.L Zone program  that promotes redeveloping  underdeveloped downtowns in rural zone areas, the boundaries of which are defined in downtown Bainbridge. Bainbridge was one of nine communities designated a R.U.R.A.L. zone by the State of Georgia. It provides three tax credit incentives: a job credit, investment credit and rehabilitation credit.

There is a requirement of creating a minimum of two fulltime jobs on each project.

“We want people to come to downtown Bainbridge and enjoy it,” said Glover.

Two questions from the audience both pertained to the condition of the brick streets at the intersections of West Street, Glover replied that Eddie Brinson will be coming back to fix the bricks that have settled and will raise them to a level position.