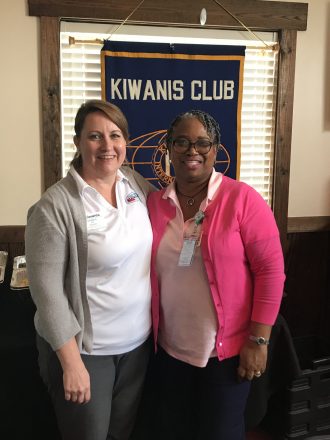 Kiwanis Club president, Shannon Key stands with Karell Bush after she discussed the Manor pageant that will be held Feb. 22.

Bush has been the activities director at the Manor for the past 10 years. She said over the years working with the elderly has been so much fun and it is something she hopes one day when she is of age, she can enjoy the other side of it. The project she is currently working on for the elderly is the pageant.

“The pageant is something I have really poured a lot into,” she said. “There are three ladies about to go out of their mind getting ready to get dressed up.”

Bush said two of the three women’s families have already taken them to get a dress and the third woman she will be sponsoring so she can have a new dress to don at the pageant as well.

“I believe it is going to be a blast to see how much fun these women are going to have,” Bush said.

Bush showed the club one of the trophies that will read “Kiwanis glowing with geriatrics of Decatur County.”

The pageant will be a red carpet event for the women and be complete with catered food from donated vendors. The winner will receive a crown that has a heart shape in the center because the décor will feature hearts due to it being the month of love.

Bush said this will be one of the biggest events of the year other than nursing home week.

“This is the first year we have ever done a pageant of this magnitude and tried to have a woman compete with other women from across the state,” Bush said.

The roses will be artificial because Bush said she wants the contestants to be able to keep them and see them for a long time.

The winner will also be registered to compete in the statewide pageant in April. Bush would love to see a woman from Decatur County win, so she has been working to make sure the women who participate could withstand a ride to Atlanta and participate if they wanted.

The CEO of the hospital’s wife, along with two Kiwanis Club members, will judge the pageant.

The pageant will be held Friday, Feb. 22, at Memorial Manor, beginning at 6 p.m.