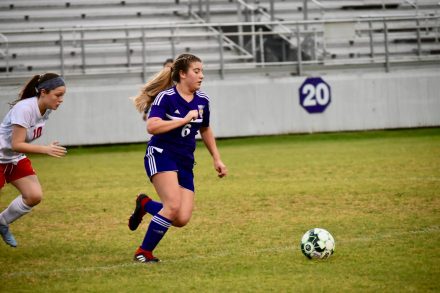 Last Friday the Lady Bearcats hosted the Dougherty High School Lady Trojans at Centennial field, and came away with an impressive 9-0 shutout.

Bainbridge Junior Midfielder Taylor Emmons began the scoring  in the 2nd minute of the game as she received a loose ball above the Dougherty Penalty area and drilled a 21 yard shot to the left post to give Bainbridge an early 1-0 lead.

In the 10th minute the lady Bearcats extended their lead at 2-0 as Senior Forward Mabry Grace Briggs slipped a shot under the Lady Trojan Goal keeper from the six yard box,  for the score.

Junior Midfielder Jamya Brinson assisted on the play as she brought the play in from the wing and found Briggs open in the center, who quickly settled the ball and shot.

Brinson scored the next goal for the Lady Bearcats in the 15th minute as she received a pass from Emmons and then scored from 8 yards away upping the advantage to 3-0.

In the 21st minute Emmons sent a corner kick into the field and a Dougherty Defender inadvertantly redirected the ball for an own goal giving Bainbridge a 4-0 lead.

Bainbridge scored their fifth and final goal of the first half in the 39th minute as Brinson scored her second goal of the game. Briggs threw the ball into Brinson who dribbled past several defenders before sending in a shot from 6 yards away.

Emmons and Briggs combined for four more goals to lead Bainbridge in the Second Half.

Emmons scored in the 46th minute on a free kick from 22 yards away following a Lady Trojan Handball just outside the penalty area, surging the lead to 6-0 .

Bainbridge Juinor Midfielder Genesi Martinez lofted a shot towards the goal, in the 50th minute, that was deflected that Briggs seized on the opportunity and scored from 10 yards out for the seventh goal on the game.

Emmons scored a hat trick in the 59th minute, as she received a pass from Briggs in the center, and then sent a low shot just under the goalkeeper’s hands giving Bainbridge a 8-0 lead.

The final score on the night came in the 61st minute as Briggs headed in a goal in front of the Dougherty goalkeeper following a cornerkick by Brinson.

On Tuesday night the visiting Lady Tigers of Dothan High were able to squeak out  a narrow 1-0 victory at Centennial field.

Ironically in the contest Dothan attempted more shots(17 to13) than Bainbridge , but the lady Cats had more shots on goal than Dothan 8-6, but unfortunately for the hosts none were unable to reach the back of the net. Both goalkeepers and defenses played inspired.

The lone Dothan score came in the 56th minute, of the second half, as a corner kick by Dothan was lofted over the Bainbridge defense for the score. Despite several attempts late Bainbridge just could not get a shot through.

The loss evened the Bainbridge record at 1-1 on the season.