Nesbit to be inducted to Decatur County Sports Hall of Fame 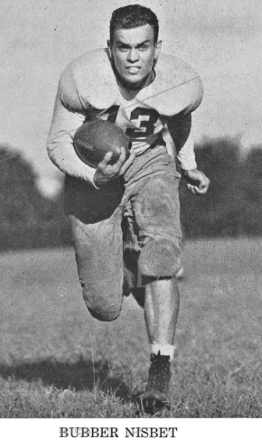 The late James L. “Bubber” Nesbit will be inducted into the Decatur County Sports Hall of Fame on Saturday, March 2, 2019. The banquet will be held at the Bainbridge Country Club at 6:00pm. Tickets are on sale at Grimsley Pharmacy and Parker Paint ($20 each).

Nesbit was raised and educated in Bainbridge. He played halfback and fullback for the Bearcats in the 1930’s. He led Bainbridge to their first undisputed “Conference Championship” beating Valdosta 19-14 in the SGFA Championship game.  His leadership on the team was outstanding, and he was named All-Conference. In post season play, he captained the 1931-1932 All-Conference team.

Nesbit was awarded a football scholarship to the University of Alabama where he played fullback from 1933 to 1937. At Alabama he lettered in football all four years under Coach Frank W. Thomas. In the 1934-35 season, as a teammate of Bear Bryant, he captained the Crimson Tide team posting a perfect 9-0 record. Nesbit then played in the January 1, 1935 Rose Bowl where Alabama defeated Stanford 29-13 for Alabama’s 4th National Championship. He was named an All-American. He received a Bachelor’s and Masters degree from Alabama.

After college graduation he had a very successful high school coaching career. He coached high school football teams in Georgia, Arkansas, and South Carolina. In 1946 and 1947 he was the Head Football Coach at Bainbridge High School.

In an article from a Greenville, South Carolina newspaper much insight was shared regarding the character and leadership of James “Bubber” Nesbitt during his high school coaching days. At the time of his coaching tenure in Greenville, there was an intense rivalry between Parker High School and Greenville High School. Greenville High had beaten Parker from 1925 through the 1940 season.

Greenville High entered the play-off with a 9-0 record and on the verge of a state championship. Nesbit led Parker High to their first defeat of Greenville and became a legend among the fans. His players shared their memories of him and his leadership style. One player stated that he was “the best at rescuing the high school drop-outs and turning them into college graduates or military officers! He cared about his players and their futures!”

Nesbit enlisted in the United States Navy Pre-Flight Training V-5 Program during World War II.  After the Navy he journeyed back to the University of Alabama where he worked from the 1950’s until 1980. During his Alabama tenure he coached for Bear Bryant and recruited. He was the head recruiter for Alabama from the 1950’s through 1980.  He, also, was the assistant athletic director at Alabama until 1958. Nesbit then became an administrator for Continuing Education at the University until his retirement in 1980.

Nesbit was not only a leader in the Alabama athletic program, but he also was very active in charitable organizations in Tuscaloosa.

He served as President of the Tuscaloosa Kiwanis Club, Key Club sponsor, and the Alabama District Secretary-Treasurer of Kiwanis International from 1963 through 1987.