‘Little Shop of Horrors’ in rehearsal at BLT 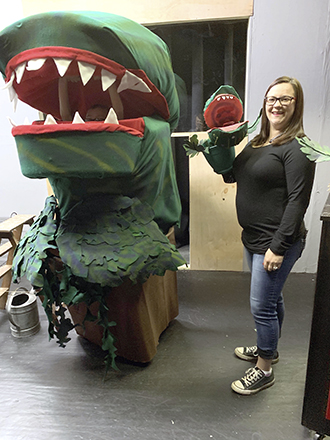 A lot of work goes into any theatre production before opening night. But, preparations for BLT’s upcoming show, “Little Shop of Horrors” are really challenging. However, thanks to the hard work and creativity of Rachael Crager, who has made a puppet head for every growth stage of the man-eating plant, things are beginning to come together.

She started by making one of the smaller ones first, then went on to create the large one. It took her two long days to make the big one, which must house a person to make the mouth open and close. She said she used a garbage can as the base, covered it with felt, and stuffed the head with foam rubber. The felt was then painted as well as were the large leaves on the sides.

Director of the show, Ida Cooksey, said she directed the show at the high school 15 or so years ago when her son Charles was in the play. “I probably would not have attempted it now if I hadn’t already done it,” she explains. Even at that she admits she was reluctant to take it on. “It is a really challenging show,” she adds. What pushed her over the edge of indecision was an artificial plant she found at Michaels last Halloween. It contained the undeniable head of the man-eating plant. “I purchased it and took it as a sign that I should commit to the show.”

The show has been a successful movie and stage show through the years. “It’s a little dark, but funny,” says Cooksey, to which Crager added, “the music is very catchy and upbeat.”

Some members of the cast will present a preview before the movie scheduled for Willis park this coming Saturday evening. They will also visit the Kiwanis Club on the 21st to promote the show that opens Thursday, February 28 at the Bainbridge Little Theatre. The show will continue to run through that weekend, into March 3.