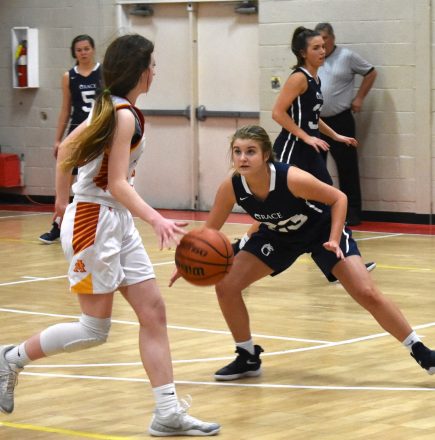 It was a great night for the Cougars and Lady Cougars basketball teams on Friday, as they both won and are advancing to the state tournament.

The Lady Cougars won in a 28-21 game against Highland. Kate McRae was the high scorer of the night, scoring six points with Mary Glenn Warr and Ella Harrell trailing behind her with five points of their own.

“Going into the game we knew we were missing one of our biggest competitors, Mallie, due to injury but we had young players step up and contribute offensively and defensively when we needed it most, she said. “I’m proud that every girl puts the team first and has all season. It took a full team effort to earn a spot to the state tournament and I’m excited to see their hard work paying off at the right time.”

The Cougars won in a close game against Fullington, where they led until the fourth period. They came out on top, though 78-71.

Jaylen Jones made net after net, scoring 49 points, followed by De’Andre Rogers, who scored 14 points and hit 100 percent of his free throws.

Jeb Smith and Seth Parker helped out with six points and Chasen Wood with three points.

Jones led in offensive and defensive rebounds with the help of Rogers and Wood.

“Respect to the players, coaches, and Grace family that travel to every game. Fullington is a big team in size and very physical, said Coach Shavon. “The GCA players kept their composure and executed down the stretch. We had a goal of making it to state and we accomplished that.  Now we are moving forward  on the road to the championship. One game at a time. “

The Lady Cougars then headed to Augusta Monday night, where they faced off against Alleluia and won 47-24.

Warr and Woodrum also played a key role, contributing six points of their own, while Andrews scored three and Lainey McRae and Harrell scored two.

With this win, the team will play again Friday night at Brewton Parker.