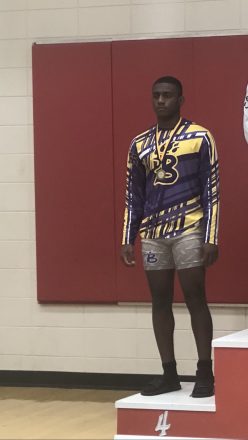 The Bainbridge wrestling team traveled to McDonough last weekend to compete in the first round of the state wrestling tournament.

Out the gate, the Bearcats got wins from Lawson Singleton at 106, Carsen love at 132, Randy Fillingame at 182, Hunter griffin at 285 and Arkeavious Marshall, who upset the No. 1 seed of the tournament with a second round pin.

Several Barcats missed opportunities to win in the first round while having their opponents pinned, but not being able to finish. The second round of the tournament didn’t fare so well, said Coach Chad Smith.

“We lost all matches,” said Smith. “In the third round we took another step forward with Arkeavious Marshall etching his name in the state finals with a win over the No. 2 seed from Jones County. Carsen love had several great wins to follow to finish as the state alternate at 132. All other Bearcats lost out in the third and fourth rounds.”

Region champion Randy Fillingame was injured and pulled out of the tournament. Bainbridge had several freshmen attend and get some great wins and experience.

“Lawson Singleton and Hunter Harris did a great job as ninth graders at their first state tournament,” said Smith. “Hunter Harris finished up at 10th and Lawson 11th. Even though they were not high enough to place and advance, being in the ninth grade and being the top 10 and 11th wrestler out of 64 teams is not a bad achievement. I look forward to what they have to offer in the future.”

Veteran Kendall Glover had the worst draw of all the Bearcats when he drew back to back returning state placers.

The Bainbridge wrestlers will leave Tuesday for Macon for the state finals where the top 16 best wrestlers in each weight class will be fighting for the top six positions.

“It’s been a privilege coaching these boys,” said Smith. “They are special to me. Senior Randy Fillingame has been with me for six years and Chris Rainey for four years. Both are very special young men. Randy plans to further his education at LaGrange or Fort Valley to study biology and pursue a future in Dermatology. Chris will enlist in the army where he has already completed basic training.

“Both will be really missed.”