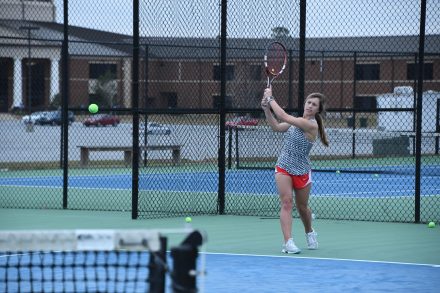 The Bearcats and Lady Cats tennis team is back and ready for another season of dominating in the region. With six seniors returning, the team looks more powerful than ever.

Senior Sydnee Burke said the team has been putting a lot of work in during the off-season and hopes it has prepared them to take region this year.

Ben Mitchell said he has noticed a difference and they are working hard to become better every practice and watch it pay off in the matchups against other teams.

The Bearcats know opponents like Harris County will be a tough matchup in the region, but feel they are ready to take on the challenge.

The Bearcats are facing some rebuilding after their number one singles and number one doubles team graduated, but Coach Amy Thomas said there are lots of young men who have put the time and work in and it’s their turn.

Thomas said the senior girls have spent the last four years building up the team, so she is anxious to see how they lead this season.

Burke, Bree Powell and Jade Stacey all co-captain the Lady Cats and are focused on making a comeback this year and going further than the Elite 8.

“We want to go all the way and make it to the championship,” Burke said.

Thomas said this year the team has a lot of talent, but even more so they have heart.

“We are a force within the region, but pretty soon everyone in the state will be looking at us because we are coming for them,” Thomas stated.

Brad Mitchell has a new motto for the team and wants opponents to know they are doing more than coming for them.

“We are the tennis devils; we are out to steal, kill and destroy our opponents,” he joked.

Thomas said the team is always kidding around about how they plan to take on other teams, but when it comes time they have their game faces on and are ready.

The teams will take on their first opponent, Thomasville on Tuesday afternoon at Bainbridge High School. The matches begin at 4 p.m.