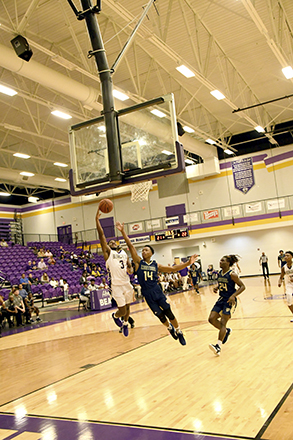 Both the Bearcat (13-12, 4-4 region) and Lady Cat (13-13, 2-6 region) basketball teams punched their tickets to the state playoffs and a berth in the Region Semifinals after defeating Thomas County Central at home Tuesday.

The Bearcats played Warner Robins Friday, who they beat 50-48 the last time they played on Jan. 25, and the Lady Cats played Veterans in the region semifinals.

Bainbridge beat Thomas County Central 59-50 in the Region play-in game. The Yellow Jackets played it close with the Bearcats in the first half, but a buzzer beater layup by Bryce Jones at the end of the half set the tone for the rest of the game. Bainbridge threw in another 14 points in the third quarter and added another 22 in the fourth, overwhelming the Yellow Jackets.

The Lady Cats didn’t trail the entire game against the Lady Jackets, taking a commanding 18-11 lead at halftime and putting another 22 on the board in the third quarter and 11 more in the fourth.

In double figures for the Lady Cats was Mycha Myers Harris with 12 points. Other scorers for the Lady Cats were Tykeia Campbell with 9 points, Taralyn Brown with 8 points, Ziauna Andrews and Detavia Salter with 7 points each, Denise Chappell with 4 points and Taniah Register and Anndrea Porter with 2 points each.

Bearcat wrestling prepares for sectionals after huge performance at…