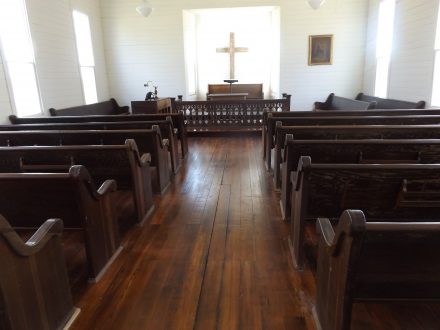 Readers may recall an article that ran in The Post-Searchlight last April about moving the historic Fowlstown Methodist Church two miles down the road to the Swicord Family Farm. The plan was to renovate the building and make it available for weddings and other celebrations.

As an update, family members now happily report, “It’s been a long road, but we made it happen. We are happy to now be open and operational.”

A family wedding was held there in November when Colby Swicord and his bride Korey were married. They had an outdoor wedding with the new deck and steps acting as the place you say “I do.” Another wedding is planned to take place on February 15.

The church was built in 1887 and was part of a charge with the Faceville Methodist Church until 1962, when they ceased operations in Fowlstown. The church sat empty for many years as the trustees attempted to sell it. That is when J.B. Swicord decided to purchase it in 1967. He had no idea what he would do with it, but as it had been an important part of the life of his family for so long he just knew it had to stay in his family and the Fowlstown community.

Now, nine months later, the 132-year-old church has been restored. There are new windows and roof, the church has been painted inside and sits on a new foundation. The entry to the church now has new steps that lead up to a newly built porch. The building and furnishings have managed to retain the rustic style of a country church.

Inside is a piano that came from the Attapulgus Methodist Church. The carved altar is the original one, and now has a large cross made from boards from the old foundation that hangs in back of the altar. The hanging white light fixtures came from the old Suwannee Grocery in Bainbridge, and have been in the Swicord attic since 1966. The stained glass panes above the door were made by Katherine Littleton.

The building can be modified on the inside, outside, or both, to be used for weddings, luncheons, and parties. A catering kitchen for events held at the church is available in the adjacent building called The Lodge.