GCA advances to round two of region 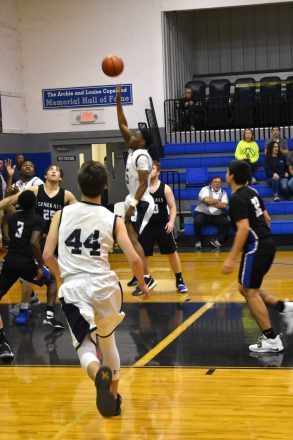 Grace Christian Academy Cougars and Lady Cougars basketball team is headed to round two of region play after dominating against Fullington and GCS.

The Lady Cougars came out in full swing, winning 47-32 with team members Lainey McRae and Emelia Woodrum making big plays for the team.

Mallie Andrews also contributed to the team’s success with nine points, scoring in the second and third quarter. Kate McRae was right behind Andrews with six points, followed by Caroline Wells with five.

The Cougars kept up the momentum and won against GCS 70-54.

In the first quarter, the Cougars scored 13 points, with Jaylen Jones netting 10 of them. Chasen Wood helped out Jones by scoring two points of his own, and De’Andre Rogers went one for two on the free throw line.

Wood and Jones continued to light up the court in the second quarter, scoring 13 points combined. Wood scored two three-pointers, while Jones scored one three-pointer and two two-pointers.

Both the GCA Cougars and Lady Cougars will continue to the second round, where they are unsure who they will face off against.