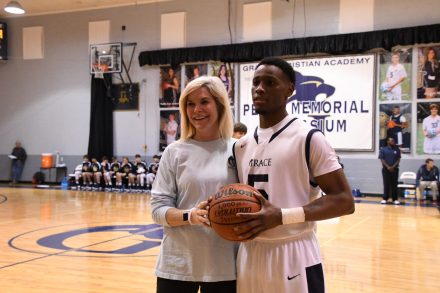 The Lady Cougars made net after net in their 61-20 win. Senior Mallie Andrews was one of the players key to the win, scoring 18 points, and making six out of eight free throws. Backing up Andrews, Caroline Wells also scored 18 points and made two of five free throws. Emelia Woodrum racked up 11 points, while Ella Harrell brought in eight points.

The Cougars came out with just as much fire, winning 79-48. It was an especially exciting night for senior Jaylen Jones, who scored 21 points and scored his thousandth point. The game stopped and Jones was rewarded with a basketball played in Tuesday’s game by athletic director, Rhonda Wells.

Once the game resumed, the team only continued to pick up steam, racking up 20 points in the first period and 28 points in the second. Senior De’Andre Rogers also scored 21 points, followed by Wyatt Carpenter who scored 15. Jeb Smith scored nine, while Seth Parker scored eight points.