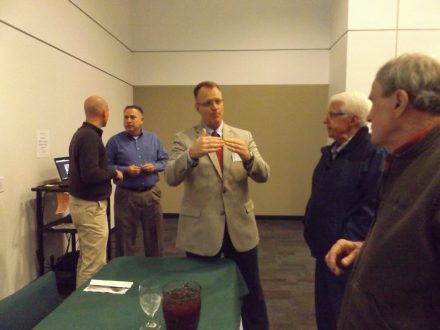 Superintendent Tim Cochran spoke to Rotary this week and gave what he called his “State of the School” annual address.

After explaining that the amount of funds received from the state is driven by enrollment, he reported the enrollment figures for October of 2018 were down 100 students from what they were last year. A similar decline reflects a decrease in population in the Southwest region.

Cochran said the 2018 graduation rate for Bainbridge High School was 93 percent, up from 2012. He said he was not happy with the way the state College Career Ready Performance Index measures, placing Decatur County Schools at 69 percent, as they do not compare the same way each year, and rank with a bell curve mentality. He believes the state should look at how they measure school performance, as it does not accurately reflect change in the way it ranks schools. The matrix gets changed every year. In answer to a question from the audience as to what these figures reveal, Cochran answered, “It measures poverty very well where it exists in Georgia.”

However, according to Regional Educational Supervising Agency (RESA) that ranks the ratings of the 15 school districts in Southwestern Georgia, Decatur County Schools rose from 9th place in 2015 to 5th in 2018.

Another positive for Bainbridge High School is that it has increased the number of students that are in dual enrollment. In 2015, the high school had 39 students taking courses at the college level. Currently, there are 190 students enrolled at either ABAC and or Southern Regional Technical School.

Cochran said these programs can be offered at the BHS campus or at the college, and listed some of the fields in which students can enroll. All efforts are being made to offer classes in fields that will help students prepare for employment with our businesses and industries. The school has formed a great partnership with Bainbridge Manufacturing and has listened to the skill needs of the new Taurus plant.

In spite of declining enrollment resulting in less funding from the state, the Decatur County School System budget has for the first time since 2002 has no austerity cuts.

He elaborated on the need to close Elcan King Elementary, which had empty classrooms, and distributing those students to other schools. He indicated they are in the process of removing the building to make a parking lot for Centennial Field.

Other projects on the drawing board are remodeling of the old West Bainbridge Middle School, where the district will consolidate all central administrative offices to one campus. Enrollment will figure into what we do with the Bainbridge Middle School Campus, as the school district has purchased land next to the new high school that could be the future site of a new middle school.

Some changes may be coming in the school calendar, as well, as the state wants to pass legislation that would have students starting school no sooner than ten days before Labor Day, and ending by Memorial Day. It would still be 180 days, but would take away some of the breaks and testing would happen after Christmas. Cochran said he was not in favor of having kids do testing after the Christmas break, and believes it should be before the break Christmas break. He added there are some options and flexibility in other proposals, and we will just have to wait and see what the State passes.

A question from the audience asked how the coming charter school would affect the Decatur County School system. Cochran answered that they are definitely going to pull kids from the public schools, and it will have a negative impact on the public schools and even Grace and Southwestern Academy.

He said the last word he heard was that they were going to purchase property in the West Bainbridge area. It is his understanding they will begin with K-6 grades, and add a grade per year until they are at full enrollment of 600.

The last proposal Cochran said he saw was HB 787 that would increase the amount the state pays for each child in the charter school to $8,000. That is $3,000 per child more than our public school gets, which is $5,000 per student.