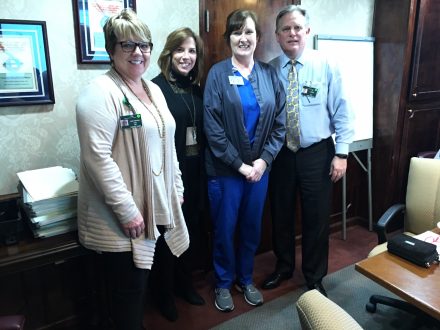 Kim Zillis, RN, was the recipient of the Daisy Employee award given at the January board meeting.

Memorial Hospital and Manor Authority reported a net income of $304,271 for the month of December, making it a “green” month twice in a row. CEO Jim Lambert reported that patient volume was up and expenses down.

After hearing a report from Building and Grounds Committee reference problems with a 400 ton chiller used in the OR department, the Board approved a $35,000  expenditure to obtain the necessary repairs.

Also approved was a five-year contract renewal of the hospital’s insurance after studies showed it was best to stay with the present insurer.

Lambert reported that all employees in the business office and medical records have been transitioned to Xtend, beginning Jan. 1. Xtend personnel have been on site working to complete the orientation of staff.

An agreement has been signed with Account Billing Service to help the hospital settle the old accounts receivables in the physicians’ practices. The hospital has never sent any practice claims to collections and Lambert said at this time there are a significant number of accounts beyond 180 days. The agreement was for ABS to begin trying to collect on the old accounts prior to moving them to bad debt collections. All accounts will be reviewed by the physicians for accuracy prior to sending out the letters.

Lambert explained that the hospital has complied with the rule (CMS-1694-F) that went into effect January 1, 2019, for all hospitals to establish, update and make public a list of standard charges provided. It is required that hospitals post these charges in a machine -readable format on their websites.

Reports were also given on the progress of the Medical Detox Program, defining what needs to be complete prior to admitting the first patient. It is expected the first patient will be admitted within the next 45-60 days.

Another project explained was the outpatient lab prompt pay discount plan that would be competitive with other prompt pay lab discounts provided in the area and is consistent with the managed care contracts. Individuals would make an upfront payment of $10 per test for the majority of tests.

There are certain wellness tests covered at 100 percent by all insurances and high-end genetic tests that won’t be included in the prompt pay discount program.

Memorial Hospital will begin the program with employees and their families under the hospital’s health insurance plan and self-insured patients before offering it to the public.