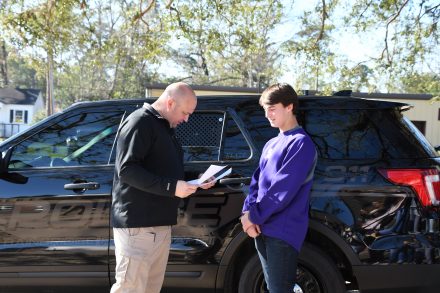 Wednesday afternoon, members of the First Port City Bank Youth Leadership class attended a training seminar at Bainbridge Public Safety, where they learned everyday situations officers face and the tough decisions they must make in a second’s notice.

The seminar began with Officer Chip Nix selecting two students to play marijuana dealers who were traveling to Tallahassee. The students had to come up with a story and retell it to officers, as if they had been pulled over. They quickly learned details are often left out and with such a variation in the truth it can be easy to spot when someone has been up to something they shouldn’t.

In the scenario, Nix asks permission to search their car, which the driver obliged. Nix said that was fine they would do a perimeter search with their drug dog. They brought out K9 Kenzo for the students to meet and then had him search the car, where they had planted something for the dog to find, so students could see him in action.

Kenzo immediately alerted to the trunk and showed the students how worked up and excited he gets when he makes a find.

After watching Kenzo in action, students were then tasked with various roles as police officers, who were pulling people over or responding to a suspicious person. The students would have to make their own judgment calls on if they needed to use their fake weapon or could just use a loud voice to make the suspect obey.

Most of the students found themselves being shot at with a fake weapon, because they were not able to make a judgment call quickly enough.

While the students laughed at the dramatics of the situation, they quickly learned from dash cameras and body cameras that these scenarios were completely real and some officers never recovered from those specific calls.

Two calls that were of particular note were a suspicious person and a speeding call.

In the suspicious person call, Officer Quincy Smith responded and asked the suspect to stop and just explain what he was doing. The suspect answered Smith’s question by shooting Smith directly and then running from the scene.

The speeding call happened in Georgia almost 15 years ago. A rookie cop pulled over a man who was speeding. The man, Andrew Brannan told the officer to shoot him then pulled out an assault rifle and shot the officer nine times. The officer could be heard taking his last breaths on his dash cam.

Students could opt out of watching the video, but they were hoping to show them that these are real life situations law enforcement face. They put their life on the line every day to protect others in the community, all while hoping they can return home to their family at night.

Students felt an array of emotion, but overall better understood that officers are not trying to intimidate or frighten others they just have to use assertiveness in order to take control in a situation that could easily get out of hand. Students thanked officers for this look behind the scenes, before trying on some of the turnout gear and finishing the program.