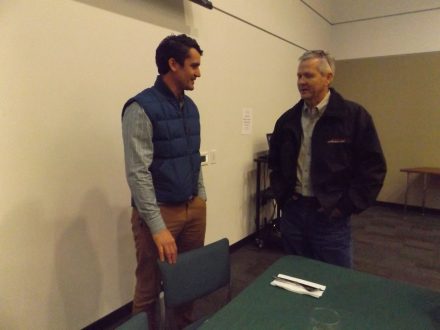 Gallagher Dempsey, founder and brewer of Bainbridge’s new Southern Philosophy Brewing Company, came to the Bainbridge Rotary meeting this week to speak about the craft brewery.

He first asked a short quiz regarding beers, such as, “What is the difference between ale and lager?” The answer basically is they are produced with different yeast species and ale ferments at a slower pace.

Another question, “What is a growler?” The answer was provided by showing a photo of a large jug you can bring to the brewery; fill it up, then take it home.

But the biggest question of all was, “When will you be open?”

Dempsey showed some before and after photos of the building on the square.

It has been gutted and is now being rebuilt. His response is that he plans to be open sometime in April.

Dempsey, a Tallahassee native who graduated from FSU with a degree in business, claims he has been brewing for 16 years, having begun at age 19.

He has entered his brews in several brewing competitions and in 2018 he won a first and a third place in a South Regional competition. He has also served as a certified judge for competitions.

He is living his life’s dream of opening his own brewery. He explained why he chose Bainbridge. He saw community support for such an endeavor, as well as an uptick in local economy.

There is a demand in Decatur County, as the closest craft breweries  are in Albany, Tallahassee or Dothan, Ala. He gives credit to Amanda Glover at the Downtown Development Authority, and to Tyler and Heather Thomas of the American for encouraging him to come to Bainbridge.

He expects the brewery to have a huge impact on the local economy, and to back up his prediction he cites that in 2017, 6266 craft breweries were responsible for 76.2 billion dollars to the U.S. economy.

Plans are to be open only four or five days per week, and some foods will be available along with the beer.