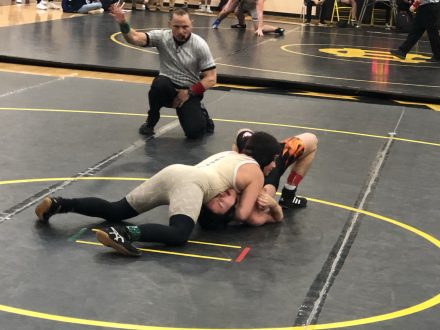 The Bainbridge wrestling team headed to region duals in Harris County last Friday, where the Bearcats competed for the team portion of the region title.

In the first round, the squad wrestled the defending region champion Harris County and lost 51-27, but giving up 18 points on forfeits due to empty weight classes. In the second round, Bainbridge had Warner Robins and ran through them with a score of 54-30. In the final round, the Bearcats had region rival Thomas County Central. The match was tight until the end with TCC winning 42-36. Again, Bainbridge gave up points due to forfeits.

“I saw a lot of improvement out of our young ninth and 10th graders,” said coach Chad Smith.

Lawson Singleton (106) wrestled up at 113 and got a key win. Carson Love (138) has dropped weight to the 132 class and will be a contender for the region title. Kendall Glover at 138 wrestled well also as one of the captains on the team. Hunter Harris, a very promising ninth grader, won all three of his matches. Randy Fillingame, one of the two seniors on the young squad, also won all 3 matches. Newcomer Brian Chinell dominated the 160 class in quick fashion, going undefeated.

“We are winding down the season with a home match on Thursday against Leon of Tallahassee and Northview of Dothan,” said Smith. “Then next Saturday with have the Cairo Syrupmaker Invitational to round out the regular season.”