Toys for Tots gets surprise from Florida Highway Patrol 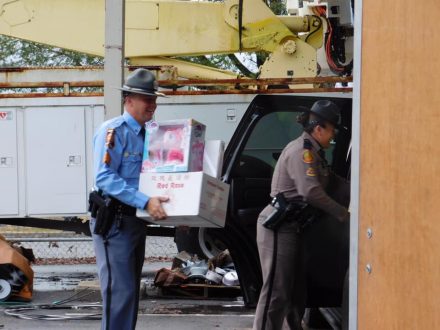 Every year Georgia State Patrol collects gift donations for their Toys for Tots program and gives them to children who may not otherwise receive toys. However, this year due to Hurricane Michael they received some surprise help from their sister station and made a real difference in children’s lives.

Sergeant Will West said they began collecting their first batch of toys and it wasn’t going as well as they hoped.

“Everyone is still hurting themselves from the destruction, and it was expected that we may not get as much as in the past,” he said.

GSP continued to put out their donation boxes at WalMart and other local stores, though in hopes of collecting more gifts, when West got a call from Corporal Sue Barge from the Florida Highway Patrol.

Barge and West have been longtime friends, and she knew the Toys for Tots program was struggling a bit. She explained to West that their donation center had more than they needed and she would be happy to give the Post 14 Toys for Tots 11 bicycles and approximately 2,000 toys.

West was elated; Friday afternoon GSP took four trucks down to the Florida State line, where they graciously accepted the donations.

“This made a pretty good difference,” West said. “Without the help of our brothers and sisters in Florida, we couldn’t have done it.”

West and his partners did not get to personally pass out the toys to the children, but they were picked up by the DFACS worker and donated to children in DFACS and also given to children whose mother is currently in the battered women’s shelter.

West is thankful to everyone who donated this year, and hopes every child in need received a toy and will have something to play with on Christmas morning.

Georgia law enforcement will continue their zero tolerance for…