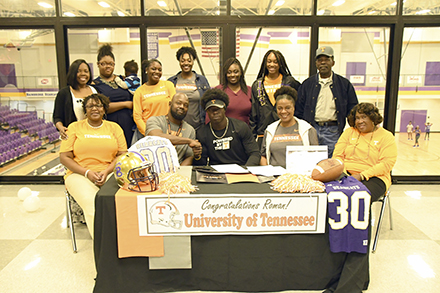 Harrison, a 3-star prospect according to the 247Sports Composite rankings, signed his letter of intent while surrounded by family, teammates and coaches. He committed to Tennessee in July.

According to Harrison, he loves the Tennessee coaches, the campus and the fans, making his commitment choice an easy one.

“For one, the coaches have been all over so they know what they are talking about,” said Harrison. “Another thing, they are family oriented, and they believe in their players. They also want to see them do well in the future, in football or just life.”

Harrison’s mother, Elitha Gant, recalled her son saying he wanted to play for a D1 program when he was a 7-year-old playing pee-wee football.

Harrison’s senior leadership made him an integral player in the Bearcats’ incredible playoff run that ended with a state championship on Dec. 11. Against Warner Robins at Mercedes-Benz Stadium, Harrison took second place in tackled with eight. He also blocked the Demons go-ahead field goal attempt with 6 seconds left on the clock to force overtime.

This season, Harrison has racked up 97 tackles, good for third best on the team. He has 9 sacks and 32 tackles for a loss.

Bainbridge coach Jeff Littleton acknowledged Harrison’s growth from his days as a freshman. Since then, Harrison’s character and maturity have allowed him to excel in places other than the football field. He agreed football taught him those lessons.

“He’s grown up and matured and realized that there is more to it than just playing football,” said Littleton. “You got to get your grades up, earn respect from your teachers.”

Harrison will finish out his high school career this spring at Bainbridge. For now, he will continue encouraging the next group of Bearcats to live up to a new standard and work hard in all aspects of life.

“It’s simple. If you work hard at a sport, stay in school and work hard in the classroom and act right, you’ll go wherever you want to go,” said Harrison.