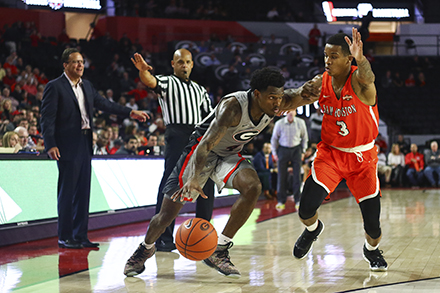 Georgia guard Tyree Crump (4) on offense during the second half of an NCAA basketball game between The University of Georgia and Sam Houston State University in Stegeman Coliseum in Athens, Ga., on Friday, Nov. 16, 2018. (Photo by Kristin M. Bradshaw)

Those familiar with Tyree Crump’s penchant for nailing 3-pointers during his career at Bainbridge can flip on the TV and see a familiar playstyle from the Georgia Bulldog guard.

Crump, a junior, has averaged 11.6 points per game through five games. The Bulldogs may have lost three of those five games, but Crump has put on a show under new head coach Tom Crean.

Crean’s style of offense focuses on fast gameplay and sharp shooting from the perimeter, both strengths of Crump.

On Nov. 20 against Clemson, Crump was 3-of-5 from the field with two 3-pointers. Things continued to trend up when he helped the Bulldogs beat Kennesaw State in an 84-71 win by going 3-of-6 from the arc.

His game was excellent against Texas Southern, where Crump was 8-of-10 from the field with five 3-pointers. He finished with 25 points.

Despite a loss to Arizona State at home last Saturday, the Bulldogs put on a show. Crump was 5-of-10 with three 3-pointers. He poured in 19.

Crump is shooting .447 from the arc, and has shown he is a key component of Crean’s offensive style.

Last season, Crump shot .339 from the field and .331 from the arc. He finished the season with 200 points. Through the first nine games of this season, Crump has scored 104 points.

Georgia and Crump played Tuesday against Oakland and will play again on Saturday, Dec. 12, against Georgia Tech at noon.