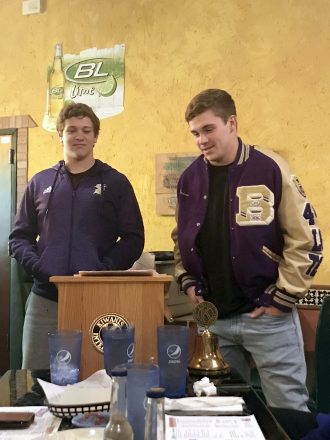 Dodson said the beginning of the season started out slow, but eventually the team all came together and started playing some football and having fun.

“We faced a lot of adversity this season,” McLaughlin said. “Going through Hurricane Michael and everything and being 2-4, but we gained some confidence.”

McLaughlin said once they gained the confidence, they felt shot down again because they lost to Warner Robins 38-0 away.

“It really humbles you,” he explained.

Fillingame said it definitely hurt when they originally lost to Warner Robins, because the team was hoping to be Region Champions. He said they never even looked at the State Championship or thought about it, but they just kept on practicing.

However, that loss would soon be overshadowed by a five game winning streak. Dodson admitted that people had told the team they wouldn’t beat Jones County, but they went out there and beat them.

“They were undefeated and thought they had it in the bag, but we beat them,” Dodson said.

Fillingame talked about how their next game against Wayne County he thought would be difficult. He said it definitely was a hard game, but the team really came together and made it a good team win.

“Then we had to face the Buford University,” Fillingame said laughing. “It was a big time school.”

Fillingame exclaimed it was an amazing win, and that God is really good for bringing the team from down in the dumps to this force to be reckoned with.

Harrison told the club that they tried to take it one game at a time, and he knows they didn’t have much support at the beginning, but they were always reminded to believe in themselves.

“We really came together as a brotherhood,” Harrison said. “By the time we got to the State Championship, we were a different team.”

Harrison explained to the club that the first time they played Warner Robins they made a lot of mistakes, but this time Coach Littleton did a great job of making plays and showing the team how they could do different coverage and things with special teams and defense.

The captains agreed it was truly a miraculous season and an amazing win; something they will remember with their brothers forever.

As for what’s next, Harrison has committed to play for Tennessee and Fillingame has three offers he is considering. McLaughlin plans to go to school in Bainbridge for a year before transferring and Dodson wants to become an electrical engineer, unless an athletic scholarship becomes available.