Bainbridge gets second shot at Demons in State Championship 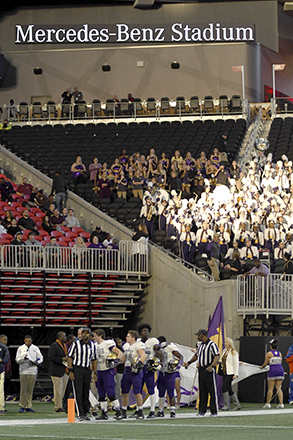 Bainbridge will make its first State Championship appearance in 36 years next Tuesday in Atlanta.

After beating Stockbridge 20-19 last Friday for the State Class AAAAA Semifinals, the Bearcats are slated to play Warner Robins (12-2), a region opponent that they lost to 38-0 on Oct. 19.

The Bearcats have won six straight games since then, beating the No. 9, No. 7, No. 6 and No. 5 ranked teams in the state classification during an unbelievable playoff run.

Coach Jeff Littleton is as excited as anybody. But he also knows just getting to this point isn’t enough.

“What we got to do is make sure that we are not satisfied with just being here,” said Littleton. “We have to go back to work this week and try to prepare to win this thing. We don’t want to just be the team that got here after a slow start and then turn it on at the end. We got to be able to finish this thing.”

Littleton has experience both playing and coaching in state championships. In 1987 he played for Worth County’s state championship team. He also was defensive coordinator for Cairo when the Syrupmakers were state runner-ups in 2007 and champions in 2008. It is, however, the furthest he has coached a Bainbridge team.

Really, though, it’s the furthest anyone has coached a Bearcat team since Ralph Jones coached the Bearcats to the 1982 state championship against Gainesville.

For a team that started 2-4 and finished the regular season 5-5, it’s one that will never be forgotten by the players, coaches, parents and fans. Only eight other teams have started .500 and made it this far in Georgia high school football history.

And now the Region 1-AAAAA No. 1 and No. 2 seeds will battle for the trophy at a time when Bainbridge is playing its best ball.

“What we have done is just gotten better fundamentally and are taking care of our assignments,” said Littleton. “We are playing with discipline. We are playing with intensity. We’ve developed some confidence over the last few games that we probably didn’t have when we played (Warner Robins) the first time.”

Perhaps what is most fascinating about this Bainbridge team is its refusal to lose. Twice in this year’s playoff run, the Bearcats have come back from a deficit to win, once against Wayne County and again against Stockbridge. The Bearcats held Buford, a team that has won 35 straight homes playoff games, to just 20 points.

At this point, Littleton believes his team can hang with anyone in the state.

“If we are given a fair shot and we prepare like I know we can, I feel like we can stay on the field with anybody,” he said.

Bainbridge’s first go at Warner Robins in October saw the Bearcats held to just 49 rushing yards and 30 passing yards. As a comparison, Bainbridge rushed for 117 total yards against Buford and quarterback Quayde Hawkins was 22-of-35 for 245 yards against Stockbridge.

The Bearcat defense also allowed 398 total yards against the Demons the first time. Since then, Bainbridge’s front seven have tightened up and developed a strong pass rush, while the secondary has locked down the backfield with eight interceptions in the playoffs so far, two of which were game-changing pick-6’s.

The Demons offense is led by Dylan Fromm under center, who has passed for 3,727 yards and 40 touchdowns this season. Warner Robins roster is filled with seniors and experienced underclassmen.

“They are a senior-laden team,” said Littleton “They have the experience. They have played now 29 games in the past two years. Their younger players from last year got a lot of playing experience. That’s what they have going for them.”

Warner Robins made it to the state championship last season, where they lost to Rome 38-0. The Demons avenged that loss last Friday when they beat the Wolves 45-28 in the semifinals.